Michelle Williams is not having it, y’all. Beyoncé’s former Destiny’s Child group-mate is hitting back at an inappropriate fan who scolded her for a lack of public congrats over her BFF’s baby news. 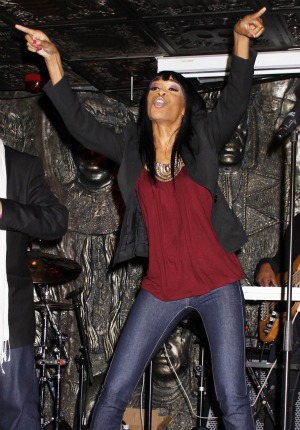 The internet is full of anonymous jerks — a phenomenon Michelle Williams experienced for herself today.

Just a days after news broke that Williams’ Destiny’s Child group-mate Beyoncé gave birth to a baby girl, a particularly ardent fan took the singer to task for not issuing a public congratulations to her BFF on Twitter.

“B***H, YOU BETTER CONGRATULATE YOUR KING ON GIVING BIRTH TO HER CHILD. (Unbelievable),” the offending tweet read.

Not one to sit back and take it when people are being jerks — especially when they are implying that she doesn’t care about her BFF — Williams immediately fired back a stern dismissal.

Did Beyoncé wear a birthing wig? >>

“Let’s get ONE thing straight,” Williams replied. “I do NOT have to say congrats to someone when they’re NOT on twitter… ESPECIALLY when I talk or email them all the time… or when I’ll be physically present as well… so harassing and stalking my timeline to see if I’ve mentioned something is POINTLESS!!!”

“My friendship with people aren’t always for twitter display. Respect that and get a LIFE!!! Enjoy this FINE day!!! God bless!!!!”

Baby Blue: Did Jay-Z and Beyoncé name their baby after his ex? >>

“This is a beautiful, precious, private time between two people and excitement is to be expected but NOT disrespect! #churchdismissed,” she finished.

Williams joined Beyoncé and Kelly Rowland in Destiny’s Child back in 2000.