Kim Kardashian tells Kris Jenner that she’s not sure about the future of her marriage on Kourtney and Kim Take New York. 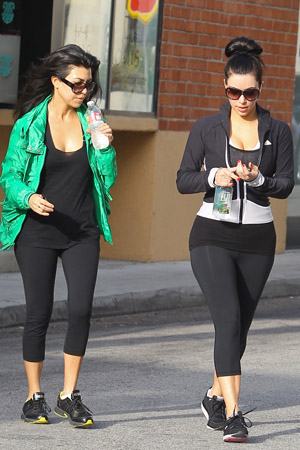 It took Kim Kardashian all of five weeks to decide that her marriage to Kris Humphries wasn’t exactly the “fairy tale” she made it out to be on camera.

“Are you excited to get home to your hubby?” Kris Jenner asked on the latest episode of Kourtney and Kim Take New York. The fame-loving duo was in Dubai promoting Millions of Milkshakes.

“Um, I mean, not really,” Kim responded. “I don’t know. I can’t really explain it. I feel a sense of relief that I’m here. I’ve been wanting to kind of talk to you about this… There’s something in my relationship I just feel isn’t right.”

“I’m just learning a lot of things about him that I didn’t really know before,” she added. “Life just isn’t what I thought it would be with him. Is this normal? Should I be feeling this way? I just feel like something’s off.”

“No, Kim, it’s not normal,” Jenner responded, on cue. “It really isn’t normal to be feeling like you don’t want to go home to your brand new husband. This is the stage in your relationship where you should be obsessed with each other and you miss each other… You should be so into the person you’re married to.”

“It’s about what’s in your heart and your head, Kim. And you kind of have to figure it out,” Jenner added. We all know where her heart was: In divorce court.

It wasn’t like Humphries was gung-ho on the marriage at that point, either. The New Jersey Nets baller jetted off to Toronto with Scott Disick for a “guys’ weekend.”

“Do you like being married?” Khloe Kardashian asked her brother-in-law when she arrived in NYC. He didn’t respond positively, likely because of Kim’s constant sniping over his Toronto trip.

What else did we find out during the episode? That it’s, like, really hard to be a Kardashian.

“I don’t want to seem like I’m complaining… but the paparazzi in New York is a million times worse than it is in L.A.,” Kourtney Kardashian told the cam. “We are working out. All sweaty and gross. I’m like bent over in not the cutest position. Sometimes I wish I’d have just one day of peace.”

38 mins ago
by Ellen Niz