Jay-Z gives us our first “glimpse” at baby Blue Ivy Carter in a new rap. All together now: Awww! 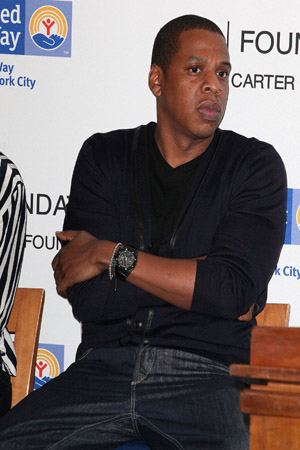 “You’re my child of a child from Destiny’s Child,” Hov raps in the song. The notoriously private rapper also reveals that little Blue was conceived in Paris. He also reveals that Beyoncé suffered a miscarriage at some point.

“Last time the miscarriage was so tragic; We was afraid you’d disappear; But nah baby you magic,” he adds. The song ends with a crying Blue — her first, but certainly not last, time on the mic.

The song is already creating a frenzy among fans — the Life + Times website is slow loading, thanks to fans looking to learn more of the princess of hip hop.

The new father revealed that he’s hoping to be a good father to his child, thanks to his own father’s absence in his life.

“It makes me a little paranoid because no matter what, I don’t think any person, or any male, goes into a relationship thinking that they’re going to leave or wouldn’t be there,” he told People at a GQ party in November.

“I come from a real place where you had to be a highly principled person,” he continued. “So, I’m pretty confident that I’ll figure it out.”

We’re pretty sure daddy Jay is already wrapped around Blue’s tiny finger. We can’t wait to see the first pictures of the family together.

Do you think Jay-Z will be a good father?

Read on for more Jay-Z

Is Jay-Z already a daddy?
Will Jay-Z and Kanye West team up again in 2012?
Jay-Z spent almost half a million on Beyoncé’s Christmas gift