Finally, Lea Michele can gab about the Glee news she’s been dying to share — she’s returning for the “revolutionary” fourth season. Find out why the news made her tear up a bit. 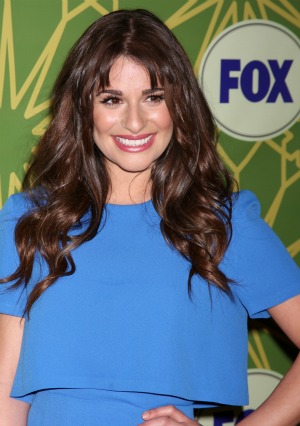 Nope, there’s no Glee spin-off, but we can do you one better — Lea Michele is returning for what promises to be a “revolutionary” season four and she couldn’t be happier.

The Winter TCA Press Tour is the perfect time to get the scoop on your favorite shows and Lea Michele gave Gleeks some good news she’s been waiting to share.

At Fox’s TCA Press Tour party, Lea Michele gushed to E!, “I’m so happy to finally be here and get to say, ‘Yes, we’re coming back.'”

After months of speculation and cryptic messages from Ryan Murphy saying no one had been fired, or was being let go because they’re graduating, she was relieved to share the news.

If you are wondering who the “we” she’s talking about is, that’s easy — Cory Monteith, Naya Rivera and Chris Colfer.

The Good Wife borrows from Glee >>

She went on to reveal she had a feeling she’d be returning, adding, “We just couldn’t tell everybody exactly what was happening. It was the beginning of the season three and to start to talk about season four I think was unfair.”

Since season three is well underway, Michele believes it’s fine to talk about it now. She reasoned, “Now it’s midseason and it’s definitely the right time to say yes, Rachel will be back next year, as will some of her other friends.”

Lea Michele also revealed Ryan Murphy‘s “revolutionary” plans for season four. “I’m so excited. I spoke with Ryan today. We had a great conversation,” she said.

She then coyly dished on Murphy’s big plan: “He told me his plan and I will tell you it’s incredibly groundbreaking and it’s revolutionary for television, the way he’s figured out how to use these graduated high school characters on this TV show.”

Getting the big news of her return also left Michele a wee bit choked up and on the verge of tears.

She explained, “I was like, ‘Ryan, I feel like I could cry!’ I always knew in the back of my mind, like, listen, I’m coming back whether they want it or not. I’m going to be a janitor in the background!”

She added of her leader and cast, “I’m thankful every single day. This is the best job in the whole world. Ryan is the greatest creator and I adore him. My cast is my family. I’m so happy.”

Well, there you have it, Gleeks. A groundbreaking, “revolutionary” season four is in sight and we get more Rachel Berry.

What do you think Ryan Murphy has planned for Glee?