Kate Middleton has kicked off her 30th birthday festivities in a most glamorous way: At the premiere of War Horse in London by the side of her husband Prince William. 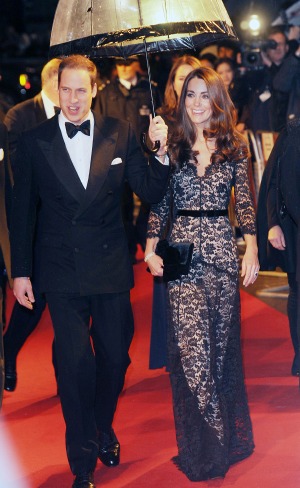 Catherine, Duchess of Cambridge rang in her 30th birthday in style: At the London premiere of War Horse. Kate Middleton brought her enviable style to the event, donning a cream and black lace Alice Temperley gown for the occasion.

Her husband, Prince William, was the picture of gallantry on the rainy night, shielding his Queen-to-be from the raindrops with an umbrella as the pair walked the red carpet together.

The couple attended the event as it was held to raise funds for The Foundation of Prince William and Prince Harry, the charitable foundation run by the brothers — now in conjunction with Kate.

“When they came to America, that was one of the most exciting events, I think, that we’ve enjoyed for some time, so it’s such an honor to be here in the UK to be able to meet them and to be able to show them, and all of us, War Horse.”

“I am delighted that the UK premiere of War Horse is in aid of The Foundation of Prince William and Prince Harry and that this special occasion is attended by two of the patrons, Their Royal Highnesses, The Duke and Duchess of Cambridge,” Spielberg said.

“War Horse encapsulates for me a timeless personal story of courage. The movie, which I am proud to say was filmed here in Great Britain, deals with the discovery of humanity against conflict, and celebrates bravery, loyalty, tenacity and hope. We are honored to dedicate this event in aid of the Foundation which recognizes the welfare of those who serve their country in the British Armed Forces.”

Kate Middleton turns 30 on Monday and is said to be celebrating with family at a cocktails and karaoke party planned by her sister Pippa Middleton and brother-in-law Prince Harry.