Melissa McCarthy is at the height of her career with movies, marriage and motherhood all on her plate. SheKnows chatted with the actress about how she balances it all.

Starring in a hit television show, winning an Emmy and creating a clothing line, all while being a full-time wife and mother, is no easy task. But Melissa McCarthy does it with a smile.

“It’s looney!” McCarthy told SheKnows Saturday night at the Palm Springs Film Festival Awards Gala. “But it’s the same as any working mom or parent. It’s so fun that it’s worth it.” 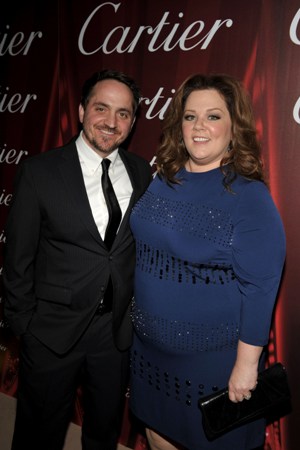 The funny Melissa McCarthy went to the International Film Festival in Palm Springs free of children and Mac n’ Cheese, full of smiles.

McCarthy and her husband, fellow Bridesmaids‘ star Ben Falcone, enjoyed the chance to get dressed up and have a grownups’ night out.

Is Universal planning a Bridesmaids two? >>

“My parents are watching the kids while we’re down here,” said Melissa.

Sporting a sparkly blue cocktail dress, Melissa told us that her preparation for red carpets is pretty simple.

“I try to get out of the house without macaroni and cheese [on me],” she laughed. “I wait till the last second to get dressed because I have to avoid the little kid hands down me.”

In addition to taking care of these two and working on three upcoming films, Melissa also told us about the clothing line she is planning.

“I hope to start my clothing line, a plus-size line or separates,” said McCarthy. “A little more modern and great fabrics, which I think is missing out there.”

For more on celeb plans for 2012, watch our Awards Gala red carpet coverage!