The Palm Springs International Film Festival brought out all of this year’s top Oscar contenders, including Hollywood heavyweights Brad Pitt and George Clooney. But these two buds won’t be sparring over Academy Awards anytime soon.

As two of Hollywood’s most sought after actors, you would think Brad Pitt and George Clooney would be in constant competition. But as Clooney told SheKnows at the Palm Springs International Film Festival Awards Gala Saturday night, that couldn’t be farther from the truth.

“We don’t ever try to compare things,” said Clooney. “He’s my buddy, so I want him to do well.” 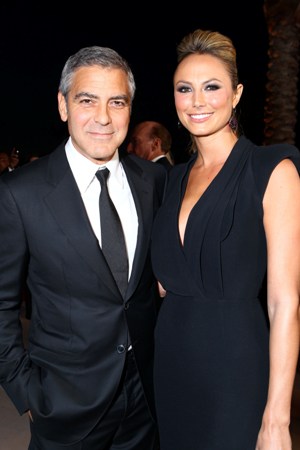 Clooney said Saturday night was the first time he’d seen Pitt in six months and he was very happy to be reunited with his close pal.

Both Clooney and Pitt were honored at the ceremony for their recent achievements and are rumored to be Oscar contenders this year, Clooney for his moving role as a widowed father in The Descendants.

“The funny thing is, the older you get the more you’re just trying to do projects you’re proud of,” said Clooney of the film.

“When people are nice and they like them, it’s still very rare and you’re just happy they like them. You can’t enjoy it too much because they can be really mean to you the next year.”

It’s hard to imagine anyone being mean to the charming actor, who spent a gracious amount of time talking to SheKnows on the carpet with his gorgeous girlfriend Stacy Keibler in tow.

The two smiled, laughed and held hands as they answered questioned and posed for pictures. The attractive coupled was only rivaled in good looks by Pitt and his longtime love, Angelina Jolie. 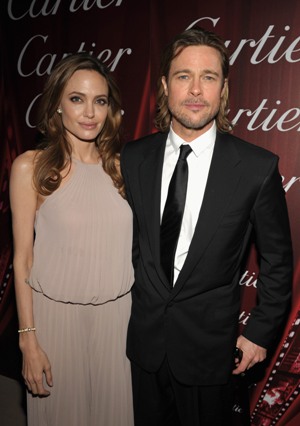 Though Jolie and Pitt chose to walk the carpet separately, Angelina stopped briefly to fill us in on their plans for the year.

“We’re focusing on birthday parties tomorrow for Zahara, and other things in life that mean just as much if not more,” Jolie told SheKnows.

As for Clooney, he’ll be taking a break from being on screen to direct the World War II drama, The Monuments Men.

Watch coverage of the awards gala red carpet above, sponsored by Cartier and Mercedes Benz, to find out what Tom Hanks, Octavia Spencer, Jessica Chastain and many more of your favorite celebs have planned for 2012.