Kathy Griffin in your face once a week on Bravo? oh, this is going to be good — real good! 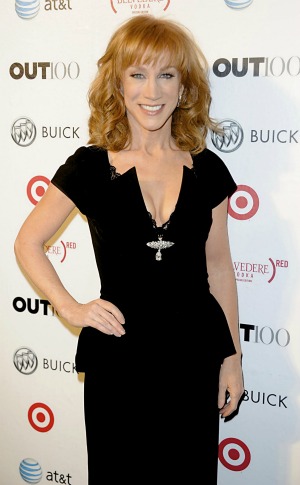 We have to say, we’re surprised she wasn’t given her own talk show sooner, but it’s better late than never.

Nothing is off limits when it comes to Kathy Griffin, so beware, America.

Bravo revealed on Saturday that it was giving the redheaded fireball her own once-a-week talk show and guess what it’s going to be called — you’ll never guess — Kathy.

Eh, could have been more original considering it’s Kathy Griffin, but why stray from the norm when it comes to talk shows?

Before you go setting your DVRs, or whatever it is you’re using these days, chillax, there hasn’t been a decision made on the air date yet — just that it will air in the spring.

Bravo is boasting that Kathy “will be the destination to get Griffin’s thoughts on everything pop culture as she rants on the week’s biggest headlines and tabloid gossip.”

The sassy gal’s show will also feature some stand-up comedy, the ever popular celebrity interviews and taped segments.

Kelly Clarkson heads to The Voice >>

If that isn’t enough, Kathy Griffin also has two comedy specials (stand-up) on tap for the Bravo network this year.

Here’s how we see Kathy going — The Soup mixed with a little bit of Bravo flare.

Joel McHale is the master of E! network’s once-a-week take on entertainment and pop culture and there is no doubt Griffin can throw down in a similar format.

No, we don’t want a Soup rip-off, just the no-holds-barred attitude.

Will you be tuning in to Kathy when it debuts this spring? We know you have an opinion, so why not use it?