Blue Ivy Carter is the newest addition to Beyoncé and Jay-Z’s family. 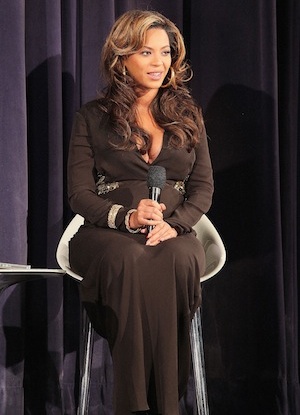 The superstar pair rented out the entire fourth floor of the maternity ward to keep onlookers away so Beyoncé could give birth without the stress of nosy onlookers. The Washington Post reported the hospital even “placed tape on its security cameras and asked employees to turn in their cell phones in order to protect the couple’s privacy.”

The name of Beyoncé and Jay’s daughter was first reported by E! News and confirmed via Twitter by friend Gwyneth Paltrow, who posted early Sunday morning, “Welcome to the world Blue! We love you already.” Other close friends of the hip-hop couple also tweeted their congratulatory messages. Jay-Z prodigy Rihanna tweeted, “Welcome to the world princess Carter! Love Aunty Ri.”

The birth of Beyoncé’s first daughter was highly anticipated. Instant media buzz began the moment the “Single Ladies” singer announced her pregnancy back in August 2011 at the MTV VMAs. Fans were interested in any pregnancy details Beyoncé revealed, including her cravings and maternity fashion style. Rumors even circulated in October 2011 that Beyoncé’s pregnancy was fake when some odd still photos of the singer on an Australian television show surfaced.

Over the 2011 holidays, media speculation heated up as fans wondered if Beyoncé went into labor over Christmas and later, New Year’s Eve. Inaccurate tweets went out in late December with fake reports of pictures.

Thankfully, this time it is official — Beyoncé really did give birth over the weekend to a hip-hop princess. Congrats to the couple. We wish Beyoncé and Jay-Z the best in their journey as parents.