Kelsey Grammer is spilling the details on the way he began his affair with his now-wife — a full six months before he left ex Camille Grammer! 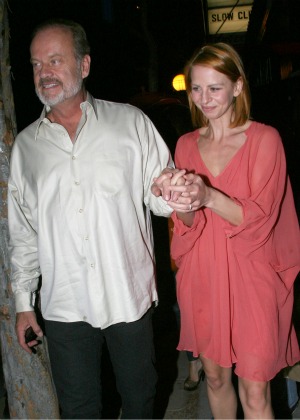 Kelsey Grammer has callously revealed the cavalier way in which he cheated on his ex-wife Camille Grammer a full six months before the end of their marriage.

Kelsey told Jimmy Kimmel about the “magical” first night he spent with his now-wife Kayte Walsh, at the time a flight attendant, while he was still married to the star of The Real Housewives of Beverly Hills.

“We actually met in the air on a plane to England,” Kelsey said. “It was very romantic, she was working on the plane.”

“We went out for coffee several days later and had this magical night in the snow in London around Christmastime. It was two years ago.”

Kelsey Grammer has a meltdown >>

Kelsey didn’t tell Camille he was no longer invested in their marriage until June 2010 — a full six months later. She claims she found out about his plans via text message when he wrote, “I don’t want to be married anymore.”

That wasn’t exactly an accurate statement, as he wed Walsh a mere 15 days after his contentious divorce to Camille was finalized.

He claims he has the full support of his friends in his marriage hopping activities. “Most of them say, ‘It’s about time. You’re a marrying kind of guy,'” he claimed.

Kelsey is now on his fourth marriage, and has four kids with three different women — including two with Camille.