Watch out, Christina Aguilera: A new big-voiced singer is set to join The Voice. 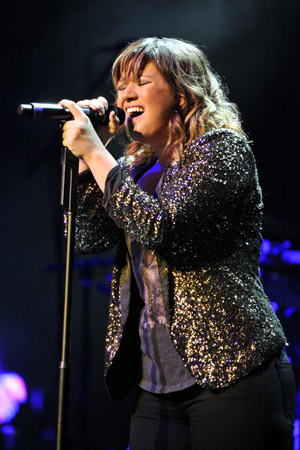 Just when you don’t think NBC’s singing competition The Voice can get any more amazing comes this news: Kelly Clarkson is set to join the show as a mentor for season two, according to The New York Post.

“The thing I love about The Voice is that they’re more mentors — they’re not judges,” Clarkson said in a 2010 interview. “I would never really want to be a judge, just because I don’t want to break people’s hearts.”

The first American Idol winner will join several new mentors already slated for the show, including Jewel, Alanis Morissette, Kenny “Babyface” Edmonds, Robin Thicke and Ne-Yo. She makes the most sense to mold young talent — after all, she went through something similar during her stint on Idol.

Clarkson hasn’t made the announcement official, but it looks promising — the Texas native joined Voice judges Adam Levine and Blake Shelton in Oklahoma for a drunk New Year’s Eve celebration.

‘Having the time of my life in Oklahoma with great friends!! Happy New Years Eve everybody!! 2012 is gonna be a great year!’ she tweeted. Levine’s girlfriend, Victoria’s Secret model Anne Vyalitsyna, tweeted photos of the group’s antics.

The new year is already shaping up to be a big one for the singer — her album sales are even up after she tweeted support for GOP presidential candidate Ron Paul.

“I love Ron Paul,” Clarkson wrote in a tweet. “I liked him a lot during the last Republican nomination and no one gave him a chance. If he wins the nomination for the Republican party in 2012 he’s got my vote. Too bad he probably won’t.”

“@kelly_clarkson I appreciate the kind words!” he tweeted.

Do you think Kelly Clarkson will be a good addition to The Voice?