Tina Fey says she deserves the blame for Alec Baldwin’s confrontation with American Airlines staff. Who knew the comedian was such a troublemaker? 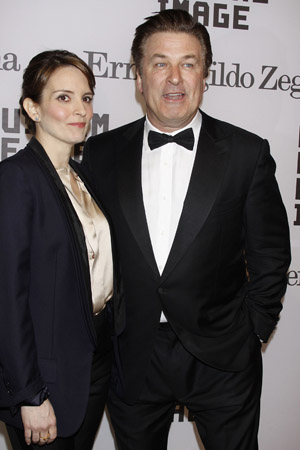 Tina Fey better watch her back the next time she boards an American Airlines flight. The 30 Rock actress admitted to David Letterman that she is the one who turned co-star Alec Baldwin onto his problematic addiction to Words With Friends.

“Alec, bless his heart, he had some trouble on the plane a few weeks ago,” Fey said on The Late Show With David Letterman. “Last spring I said to [Alec], ‘Hey, there’s this really fun game called Words With Friends’…”

“I didn’t think he got it, because he’s never invited me to play him! But apparently he did buy it,” the Bossypants author added, referring to Baldwin’s fracas with an American Airlines crew at LAX. He allegedly refused to turn off his game during departure and was kicked off the flight.

“Flight attendant on American reamed me out 4 playing WORDS W FRIENDS while we sat at the gate, not moving. #nowonderamericaairisbankrupt,” he tweeted afterward.

The airline countered his claims with their side, explaining that the longtime actor was abusive and belligerent to staff.

“This passenger declined to turn off his cell phone when asked to do so at the appropriate time,” AA wrote in a Facebook post. “The passenger ultimately stood up (with the seat belt light still on for departure) and took his phone into the plane’s lavatory. He slammed the lavatory door so hard, the cockpit crew heard it and became alarmed, even with the cockpit door closed and locked.”

He later joked about the whole incident — and his subsequent departure from Twitter — as a pilot on Saturday Night Live. “I am ashamed at the way he was treated,” Baldwin told Seth Meyers in character as the pilot, adding that he’s an “American treasure.”

“I mean, what harm would it do to let him keep playing his game… not just any game, mind you, but a word game for smart people.”

We’re going to assume that Fey won’t be introducing him to more web games anytime soon.