Justin Bieber showed off his third tattoo while out on the beach with his dad. Find out the religious message the 17-year-old got inked on his calf. 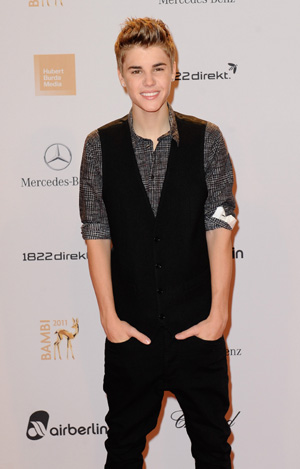 Justin Bieber was spotted earlier this week at Venice Beach with his dad, Jeremy Bieber, showing off his huge new leg tattoo. The 17 year-old has a black-and-white picture of Jesus Christ tattooed on his left calf, which looks to be an illustration taken from the book The Mysteries of the Crown of Thorns.

See a photo of his Jesus tattoo here >>

This isn’t Bieber’s first religious tattoo, as he and his father both have matching tattoos of the Hebrew word for Jesus on their rib cages. In addition, Bieber also has a bird inked on his hip.

Check out Bieber and his dad showing off their matching tattoos >>

What inspired Bieber to get a Jesus tattoo?

“I’m a Christian, I believe in God, I believe that Jesus died on a cross for my sins,” Bieber said in an interview last year. “I believe that I have a relationship and I’m able to talk to him and really, he’s the reason I’m here, so I definitely have to remember that. As soon as I start forgetting, I’ve got to click back and be like, you know, this is why I’m here.”

Bieber undoubtedly got his fondness for tattoos from his father, who showed off his multiple tattoos while playing on the California beach with his son. They played sports, exercised and even did some push-ups in the sand! It wasn’t long before Bieber attracted the attention of a groups of girls, who came up and asked to be photographed with him.

There may be more tattoos in Bieber’s future, but lets hope he is not getting them in California — at least until he turns 18! “According to California Penal Code 653, every person who tattoos or offers to tattoo a person under the age of 18 years is guilty of a misdemeanor,” says the law, according to Wikipedia.