Lifetime’s hit series Project Runway debuted their all star season of quirky fashion challenges and the returning designers are ready to design their way into the spotlight, again. 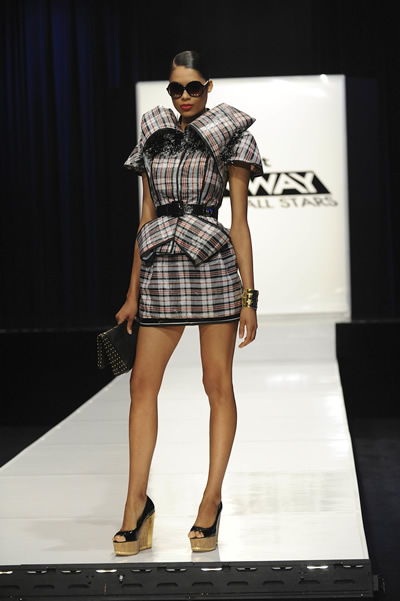 Rami receives the first win of the Project Runway All Stars season on Lifetime for a statement dress.

Their first challenge followed in the footsteps of the very first episode of season one back in 2004, a trip to a dollar store where Austin Scarlett took his first victory. This time, he wasn’t so quick to strike with beginners luck. After all, he’s rolling with the Project Runway all stars now.

While Mr. Scarlett was busy burning a hole in his plastic dress with high heat under high pressure, Rami Kashou was creating a masterpiece made of laundry bags.

“Winning that challenge was really unexpected, but at the same time it was humbling,” Rami said in an interview on Lifetime.com, happy that he could prove he knows more than just draping when it comes to runway design.

All contestants came prepared at the start of the show with a design they felt reflected them. Their dollar store challenge had to be inspired by this piece.

Mondo Guerra came in second with an interesting black dress. He too was happy to be back. Most of the all stars were, creating a runway show filled with electrical tape and tissues disguised as fashion.

Michael Costello from season eight started the season strong with a dress made from mops.

You might have been surprised to see season eight’s April Johnston back in the game. Known to design for the edgy girl who wears all black, April showed up with a ready to wear black dress that she said was a toned down version of her aesthetic.

Read more about Project Runway All Stars episode one >>

However judges wanted to be wowed and Angela Lindvall, standing in for Heidi as the host, made that clear from the start. April wasn’t in hot water this round. but if she continues with her black color palette and doesn’t start to think outside of the box, she might be in trouble.

Speaking of bland, Angela Lindvall is no Heidi Klum. “One day you’re in and the next you’re out,” definitley didn’t have the same vigor coming from Angela.

The winner of this season will work as the guest editor at Marie Claire for one year, so Editor-in-Chief Joanna Coles is the Tim Gunn of this all star season. Tim will be missed, but Joanna, unlike Angela, stands in well providing the same honest critiques, while judges Isaac Mizrahi and Georgina Chapman follow suit of Michael Kors and Nina Garcia well.

As the season treks on, hopefully Angela will step it up as the returning Project Runway designers bring their A-game to the workroom.

The stakes are high and the prize it big.