Dunzo and headed for divorce court? Say it isn’t so! Will and Jada are dodging split rumors — again — after the actress was reportedly spotted leaving the Hollywood office of celebrity divorce attorney Laura Wasser. 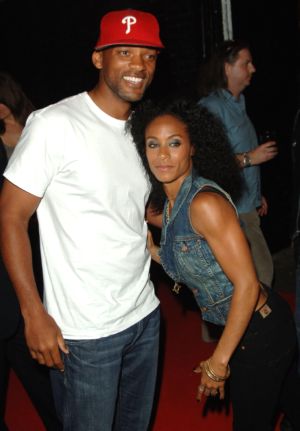 Will, Jada, do you two have something to tell us?

The Will Smith–Jada Pinkett Smith divorce whispers have kicked into overdrive among gossip gawkers for the second time in six months.

In Touch Weekly magazine — which reported that Mr. and Mrs. Smith were going their separate ways in August 2011 — now cites loose-lipped moles who say Jada has hired prominent divorce attorney Laura Wasser to broker her split from the Oscar-nominated rapper-turned-actor.

Wasser — a legal hotshot on the Hollywood split scene — has represented the likes of Britney Spears, Angelina Jolie and Christina Aguilera. She currently counts a host of future divorcées among her clients, including Maria Shriver, Vanessa Bryant and Kim Kardashian.

“The marriage is basically over,” an insider reveals on the pages of In Touch’s Jan. 16 issue. “Will and Jada haven’t shared a bed in six months.”

The tipster added, “Jada recently visited the offices of Laura Wasser. It appears that she has finally begun to take steps to dissolve the marriage.”

Are Will and Jada in trouble despite denials? >>

A usually career-obsessed Jada — whose TNT medical drama HawthoRNe was axed over the summer — has reportedly turned down a plum film role in order to be with her kids in the coming months.

“Keanu Reeves wanted to cast her in his directorial debut, but she told him it was ‘a difficult time’ and that she wouldn’t be able to leave her kids to shoot in Asia. She was talking like a single mother!”

The children’s careers are believed to be a root cause of the tension between the beloved duo. Son Jaden, 13, is a promising actor who appeared in a 2010 remake of The Karate Kid. Willow, 10, scored a dance hit with her debut single, “Whip My Hair.”

None of this is particularly pleasing to protective Mama Bear Jada, say those in-the-know.

“Jada thinks Willow is growing up too fast. She doesn’t want her and Jaden ending up like other child stars. But Will wants to push them even further!”

According to a friend, Will and Jada have already begun separating their joint assets, estimated to be worth a whopping $500 million.

When the glossy first reported the split story in August, the Smiths quickly responded with a statement shutting down the report.

“Although we are reluctant to respond to these types of press reports, the rumors circulating about our relationship are completely false. We are still together, and our marriage is intact.”

Will and Jada have been married since 1998.