Octavia Spencer has some very strange late-night habits that she has no control over. The actress confessed it all on a recent visit to Jimmy Kimmel Live! 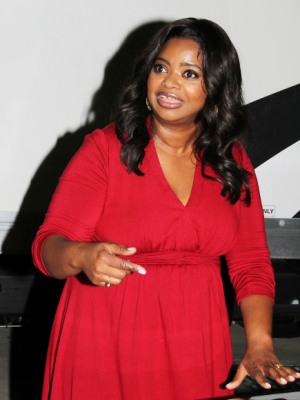 Octavia Spencer just can’t keep herself from eating peanut butter in the middle of the night. It’s not an issue of willpower, however, because she’s not even awake when she does it!

“It’s crazy,” said Octavia Spencer, obviously baffled by her own behavior. “I didn’t realize I had this condition until I kept finding spoons… I was like, ‘Seriously, how do we keep losing all the spoons?’ And they were in my room with peanut butter in all these weird places.”

Sleep eating, officially known as Nocturnal Sleep-Related Eating Disorder (NSRED), is a state of sleepwalking that includes behaviors connected to a person’s conscious wishes or wants. So while Octavia Spencer is asleep and doesn’t know she’s in the kitchen having a snack, the peanut butter is something she really does want. As Wikipedia explains it, it’s something she likely denied herself while awake.

Thankfully for Octavia Spencer, the sleep eating doesn’t occur every night. She explained, “When I’m stressed out I do it a lot. It’s funny because I was like ‘I don’t understand why I can’t lose a pound!'”

Currently the 41-year-old has been nominated for a Golden Globe Award for her role in The Help — no stress there! The single actress said she has strategically planned to attend the event solo, opting to “pilfer” a date sometime during the night.

On her radar? She jokingly revealed plans to split up Brad Pitt and Angelina Jolie and take him home!

Best of luck to Octavia Spencer on her Golden Globe Award nomination!