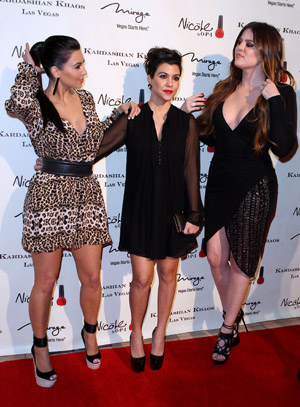 The Kardashian family has earned their fair share of bad press this year, thanks to a quickie marriage and divorce, along with that pesky child labor scandal. The family has resolved to rehab their image in 2012 — and what better way to do that than with their own magazine?

“This is a Kardashian idea,” an insider told The New York Post’s “Page Six” this week. “They have been reaching out to several media outlets.”

The Post claims that the family is “close to landing a deal with American Media Inc., which owns Star, The National Enquirer and Shape, to launch a glossy dedicated to the family.”

Basically, it’s a ploy to keep their enemies close — Star and other tabloids wouldn’t be able to publish scandalous stories about Kim Kardashian and the rest of the clan if they both belong to the same media family.

Journalistic ethics aside, it’s a win-win situation for both sides — Kardashians control the media, while AMI gets the disposable income of Kardashian fans (and yes, there are still millions of ’em.)

Barbara Walters asked the Kardashians what we all want to know.

“You don’t really act; you don’t sing; you don’t dance. You don’t have any — forgive me — any talent,” Walters asked the family during her 10 Most Fascinating People of 2011 special.

Walters is right: The family — under the direction of matriarch Kris Jenner — raked in $65 million during 2010 for nothing but personal appearances, product endorsements and their slew of E! reality shows. We just want to know how we can make that kind of cash for doing nothing constructive for society, so we’d definitely pick up every copy of FW Weekly.

Believe it or not, millions of teens and young women actually aspire to dress in the same sort of trashy couture as Kim, Kourtney and Khloe. Spandex and Stilettos could become the bible for the fashion handicapped. Potential advertisers? Lots of Ed Hardy and Affliction, alongside pages and pages of ads for the Kardashian Kollection and ShoeDazzle.

The Kardashians don’t do anything without dollar signs attached, so why would their magazine be any different? At least by calling it Kash, we know we’re just lining their deep pockets.

It’s safe to say that the Kardashians know a thing or two about snagging athletes and rappers — after all, Khloe has Lamar Odom and Kim had Reggie Bush, Kris Humphries and (possibly) Kanye West. Ever dream of snagging your own baller or rapper? This Kardashian mag could tell you how. We’d buy it, even though all we really want is to get with Derek Jeter for one of those swag gift bags he gives one-night stands.

Technically, there’s already a magazine called Spin. The Kardashians should consider buying the rights, because the magazine is going to be chock-full of the bull that the family spews on a daily basis — no truth, all fillers.

We asked about your title picks for the Kardashian magazine on the SheKnows Facebook page — and you had plenty of suggestions!

Sharon Owensby — A sheer WASTE of time and money — an insult to most of our society!!!!!

We like it, but it probably won’t fit on a magazine cover.

John Labulis — Much Ado About Nuthin’

Melissa Osorio — I’d call it H*es Are Us Weekly. HAUK for short.

We love these ideas — much better than the name they’re sure to pick. Keep ’em coming!

What would you name the Kardashian magazine?