Art consultant Will Kopelman is reportedly set to make an honest woman out of Drew Barrymore: He reportedly popped the question over the holidays! 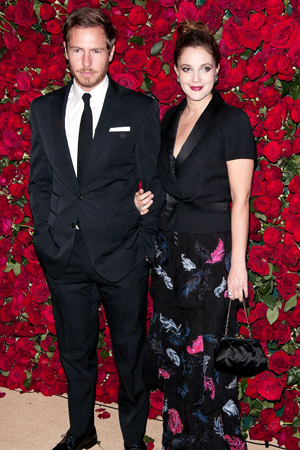 This one is out of left field: Actress Drew Barrymore is reportedly engaged to her low-key boyfriend of one year, Will Kopelman, according to People.

“They are very happy together,” a source told the magazine, adding that he proposed during the couple’s recent 10-day vacation in Sun Valley, Idaho.

We’ve reached out to Barrymore’s rep for confirmation on the happy news.

The actress never officially confirmed her relationship with Kopelman, the son of former Chanel CEO Arie Kopelman. The couple was spotted together several times throughout 2011, including stops at sporting events and Broadway shows.

The twice-married Barrymore was last linked to her Going the Distance co-star, Justin Long. However, she told Harper’s Bazaar that she liked to be independent.

“For the last decade I’ve developed such a love of my independence that I have to go, ‘Okay, you’ve had dinner by yourself three nights in a row, now you have to see your friends,'” she said in the October 2010 interview.

Why the change of heart? The 36-year-old actress and director is reportedly feeling the tick tock of her biological clock.

“[Barrymore is] yearning to get married and have kids,” a friend told US Weekly. The source added that Kopelman planned to propose, “around the one-year mark of their dating.”

Maybe a new marriage and family is just what the reformed wild child needs to complete her life?

“I have pulled myself out of a million potholes,” she told Harper’s Bazaar. “And I can see the potholes ahead of me. That doesn’t mean that I could always do that so perfectly for my own life. I totally fall in potholes. Sometimes I fall so godd**n deep, I’ve got broken legs and I have to mend myself in the well and crawl back out.”

Now Kopelman is there to help pull her back out of those troubles that life throws her way.

“He’s madly in love and knows she’s The One,” the insider told US Weekly.

Do you think the third marriage is the charm for Drew Barrymore?