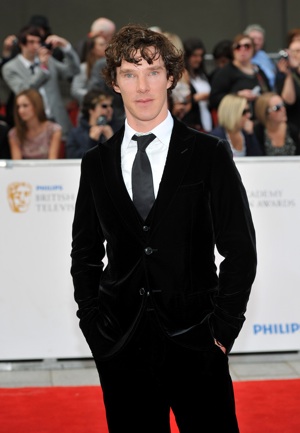 J.J. Abrams has finally cast the villain for his long-awaited Star Trek sequel. The actor’s name is Benedict Cumberbatch and he’s a London native, who recently appeared in War Horse and Tinker Tailor Soldier Spy.

According to Variety, Cumberbatch has snagged the role that was originally rumored for Benicio Del Toro. But after Del Toro declined, it was his for the taking.

The identity of the film’s villain is being kept under wraps, but rumors suggest it’s Khan. The character that was originally played by Ricardo Montalbán in 1982’s Star Trek II: The Wrath of Khan.

Cumberbatch isn’t the only Brit to join Star Trek’s expanding cast. Aside from Alice Eve, Noel Clarke has also signed on for the film. The actor is best known for his supporting role on the long-running series Doctor Who, where he plays Mickey Smith.

In Star Trek, Clarke’s character is described as a family man, who has a wife and young daughter. That doesn’t tell us much about his story or connection to the Enterprise crew. Abrams is purposely keeping those details to himself.

Benedict Cumberbatch is part of a new wave of U.K. actors dominating the sci-fi and fantasy genres. His War Horse co-star Tom Hiddleston appears in Thor and The Avengers; Tom Hardy struck gold with Inception and The Dark Knight Rises; and Martin Freeman headlines this year’s The Hobbit: An Unexpected Journey. The young Brits are taking over Hollywood.

Star Trek 2 is currently in pre-production. J.J. Abrams will direct from a screenplay written by Alex Kurtzman, Roberto Orci and Damon Lindelof. The film is scheduled to hit theaters May 17, 2013.