Darren Criss has a future in theater if that whole Glee thing doesn’t work out, judging by his Tuesday night debut on Broadway. 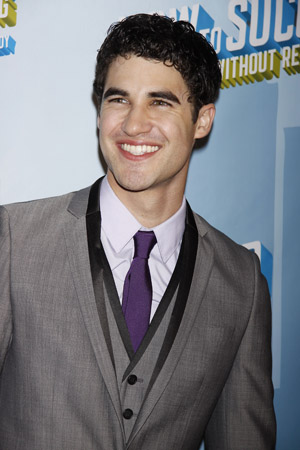 Glee’s Darren Criss admitted that he was nervous to start his two-week run as J. Pierrepont Finch in the Broadway musical, How to Succeed in Business Without Really Trying.

“Everyone’s like, ‘Oh, I gotta go to your opening night!'” he told Entertainment Weekly. “But I’m terrified. I’m like, ‘No! See it at, like, two-and-a-half weeks.’ Theater is a living creature. It takes a while to break in, like a new pair of shoes.”

However, he really has nothing to worry about. Critics heralded the University of Michigan theater student for his debut in the role previously owned by Harry Potter star Daniel Radcliffe.

“A nimble dancer, Criss made the tricky choreography on ‘Grand Old Ivy’ (with fellow newcomer Beau Bridges as the company boss) and the complicated finale ‘Brotherhood of Man’ look as easy as breathing,” the New York Daily News wrote in a review.

The actor known as Blaine on Glee can credit his work ethic and talent that catapulted him from an unknown to a superstar in less than a year.

“I always shoot for the moon in my work, so that I’m happy when I land on the roof,” Criss told the New York Times in an interview. “I’m very specific and ambitious in plotting out my goals and never take no for an answer — so it’s not like things just fall in my lap.”

Glee made him a star, but it looks like he’ll continue to have a home on Broadway.

“We’d also definitely be up for finding another show for Darren, once he is not tied down to Glee,” Succeed producer Craig Zadan told the Times.

Nick Jonas is up next in the role — he’ll take over from Jan. 24 to July 1. However, Criss is up for the intense challenge — after all, eight performances a week seem simple after Glee’s rigorous shooting schedules.

“To say something was a stretch would mean I was intimidated by something,” he told the paper. “But I love challenges that are big and hard. I mean, part of me would love to be a fat tenured professor of theater someday.”

Should Darren Criss stick to Hollywood or pursue more theater?