Is Rachel Zoe pregnant again? A source says yes — and that’s why she was keeping her tummy under wraps on her beach vacation. 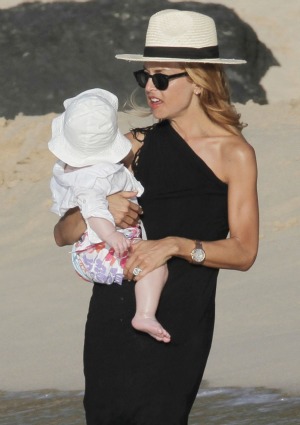 Fashionable mama Rachel Zoe might be adding a new accessory to her other hip. Already the mom to little Skylar, sources say the stylist to the stars is pregnant again — and shocked by the news!

A source close to Zoe and her husband Rodger Berman told Radar Online that the reality star is having her second.

“Rachel is just past the three month mark so she’s hardly showing yet at all,” the source said. “She’s thrilled, but, quite frankly a little shocked!”

“She didn’t think she would fall pregnant a second time, let alone so quickly!” explained the insider.

“Both her and Roger are really, really happy though, and Rachel is hoping for a little girl this time round, although more than anything she just wants another healthy, happy baby.”

Zoe spent the holidays vacationing in St. Barts, where she stayed covered up in the sand with a long caftan over her bathing suit. Trying to conceal her tiny little baby bump, maybe?

If she is pregnant, one person who probably won’t be sending a gift is her former assistant Brad Goreski. In an interview with Wendy Williams, the star of It’s a Brad, Brad World claimed that he sent a very expensive present to Zoe after Skylar’s birth but never got so much as a thank you!

“I sent an Hermes tower. It had three baby toys in it,” Goreski said. “It did not get returned. It also didn’t come back with a thank you note.”