The name of Lily Allen’s baby girl has been revealed! Thanks to a loose-lipped grandmother, we now know the singer went with an extremely old-fashioned pick for her daughter. 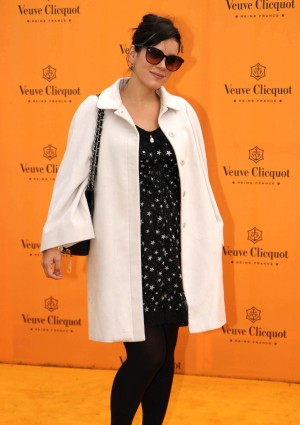 Word has it Lily Allen‘s baby name has finally been leaked! It seems the singer’s mother slipped up and used her granddaughter’s first name during a recent online conversation, and whomever she was chatting with went and tattled to the press.

Though neither Lily Allen nor husband Sam Cooper have commented on the rumor, it is believed their baby girl’s name is Ethel Mary Cooper!

Ethel is an Old English name that means “noble” and peaked in popularity in the 1890s. Famous ladies named Ethel include actresses Ethel Barrymore (relative of Drew Barrymore) and Ethel Merman.

Don’t get your hopes up too high for a confirmation on Lily Allen’s baby name. Since giving birth Nov. 25, the 26-year-old has rarely referenced her daughter, despite being an active Twitter user.

Shortly after her daughter was born, Lily Allen tweeted, “totes amaze,” and then later wrote to her fans, “Thank you for all the flowers and lovely messages everybody. Very touching indeed. Nuff luv x x.”

Lily Allen announced her pregnancy on the same day she wed Sam Cooper this past June. The singer had been pregnant twice before, but suffered a miscarriage in 2008 and a stillbirth in 2010.

Lily Allen’s baby name choice has been met with mixed reaction from the public.

“Lilly Allen’s baby’s name is ‘Ethel Cooper’ it’s unfortunate she’ll have to wait 75 years for it to suit her,” one Twitter user wrote Wednesday.”

While another fan voiced a positive reaction to the name Ethel by tweeting, “Good on Lily Allen calling her kid an old fashioned name. Too many parents out there today trying to out-do eachother with names like Summer.”

Are you a fan of Lily Allen’s baby name choice?