Demi Lovato graces the February issue of Seventeen magazine and reveals for the first time her struggle with drugs and alcohol. 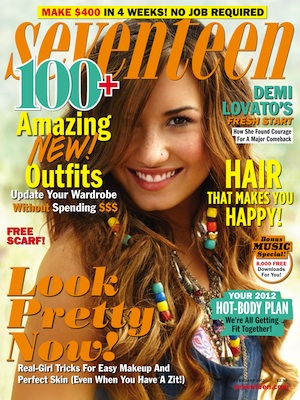 These past few years were not easy on Disney star Demi Lovato. Back in October 2010, Lovato left her music tour and entered rehab for what her camp cited then as emotional and physical issues.

Her rep released a statement at the time, “Demi has decided to take personal responsibility for her actions… she is doing just that.” TMZ reported Lovato was not seeking treatment for substance abuse but for self-injury and an eating disorder.

In February’s issue of Seventeen magazine, Lovato tells the explicit truth behind her emotional breakdown and rehab stay in a shocking interview. Lovato admits to drug and alcohol abuse for the first time and stays she was suffering emotionally.

“I’m not gonna lie. I was self-medicating. I was doing things like drinking and using [drugs], like a lot of teens do to numb their pain.”

This is the first public admission of substance abuse from the 19-year-old Sonny with a Chance star. Previous reports of Lovato’s alleged cocaine use surfaced around the time she entered rehab. Life and Style claimed they spoke with eyewitnesses who saw Lovato use cocaine and alcohol while in Texas in December 2009.

“She was doing line after line like a pro — and she was 17 at the time. I just remember her doing it as if she had been doing it for a long time. It didn’t seem like something new to her.”

Lovato checked out of rehab in late January 2011. Since she left treatment, Lovato has been extremely vocal about her struggles and desire to be emotionally and physically healthy. She tells Seventeen she has new outlook on life today.

“I don’t drink, I don’t do drugs, I don’t throw up after my meals, I don’t starve myself. There’s nothing that I do that I feel ashamed of.”

Demi Lovato is extremely grateful to those who supported her decision to enter treatment. Demi explains she and good friend Miley Cyrus hit some rough patches during Lovato’s recovery process but remain close. Best-friend Selena Gomez has always stuck by her side.

“There were two people [who were there for me]. No matter how many times we fight, we will always be in each others’ lives. [Miley Cyrus and I] are very strong-headed, so when we fight, it’s brutal and we’re like, ‘We’re never going to be friends again!’ Then two days later, we’re like, ‘I love you and I miss you!’ Selena [Gomez] and I, we never fight. She’s not a confrontational person at all. Both of them will never leave my life no matter what happens, because we’ve been through so much together.”