Mario Lopez is finally making an “honest woman” out of his “baby mama.” The Extra host has joined the brigade of celebrities trumpeting in the new year with wedding or engagement news. He popped the question to his longtime sweetheart, Courtney Mazza, in Mexico last month. 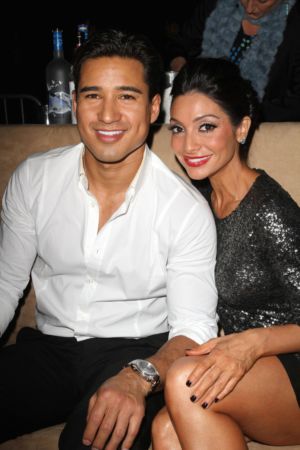 Sorry girls and gays, A.C. Slater is officially off the market. But we hear Screech might be available!

In a moment snatched straight out of a scene from The Bachelor, the dimple-cheeked hunk dropped down on one knee and proposed to Courtney on the beach of Ixtapa Zihuatanejo, surrounded by family, friends and cameras.

“I’ve come to the realization that I’m never going to meet another woman as special and amazing as the one I have and I think she’s finally succumbed to my pressure and will take me,” said Lopez, who shares a 15-month-old daughter, Gia, with his new fiancée.

The 38-year-old didn’t prepare a speech, preferring to instead take the “fly by the seat of my pants” approach to proposals.

“See, that’s the ring right there. And I’m debating right now, do I do the box like this like — bam! Like they do in The Bachelor?” he joked. “The sun’s almost setting… We’re good to go. Wish me luck!”

Mario was voted People magazine’s Sexiest Bachelor in 2008. But the former teen heartthrob’s bachelor days quickly came to an end when he met and fell in love with Courtney later that year. He’d just been cast in the Broadway revival of A Chorus Line when he found himself smitten with the skilled dancer.

The couple and baby Gia were featured in the short-lived VH1 docu-soap Mario Lopez: Saved by the Baby.

“From sonograms and baby proofing to vacations with the in-laws, Mario and Courtney will begin this exciting and sometimes overwhelming new chapter in their lives with America watching,” the network said in a press release touting the program’s premiere in November 2010.

Anyone else smell a wedding spinoff?

Mario Lopez has a new gig as a children’s author >>

Lopez will dish all the deets about how the proposal went down on tonight’s Extra. He joins a lengthy lists of Hollywood heavyweights who announced engagement news over the holidays: Including Queen of Soul Aretha Franklin, NBA legend Michael Jordan, NBA MVP LeBron James, singer Wynonna Judd and Aerosmith rocker Steven Tyler.

Lopez was previously married to former beauty queen Ali Landry. The union was annulled after two weeks. As legend has it, Landry gave Mario the boot in his well-defined bottom after she learned he cheated on her during his bachelor party.  (But you didn’t hear that from us!)

Lopez is best remembered for playing curly-topped teen wrestler A.C. Slater in the ’80s and ’90s on TNBC’s comedy Saved by the Bell.