A newly single Kim Kardashian is getting back to work — playing herself! The socialite has booked a guest appearance on Tim Allen’s ABC sitcom, Last Man Standing. Kim will make a cameo as — well — Kim, in an episode airing next month. 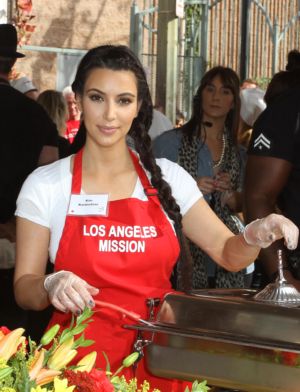 You know — because you haven’t already got enough Kim K. in your life.

The socialite will be making an appearance on the Tim Allen-assisted show, playing one of the most polarizing reality TV stars in the world today: Herself. The storyline sees Kim in a chance encounter with one of her biggest fans, Mandy (played by Molly Ephraim).

The last time we saw Kim displaying her acting prowess on the small screen, she joined Vanessa Minnillo to play one-half of a murderous duo in an episode of CSI: NY that aired in December 2009. The year before, the brunette bombshell stunk up the box office in the big screen flop Disaster Movie — another venture with Minnillo.

Of course, that hasn’t quieted critics.

Last Man Standing follows Mike (Allen), a grandfather who compensates for his all-female family by working for a super-macho sporting-goods store. He hates men doing “fruity stuff” — you know, dancing, watching Glee and getting spray tans. He becomes a viral star thanks to his video rants about the downfall of masculinity.

The Kardashian episode is scheduled for broadcast during next month’s all-important February sweeps.