Rachel McAdams wasn’t always a super glam actress: She slummed it as a McDonald’s employee during her teen years. 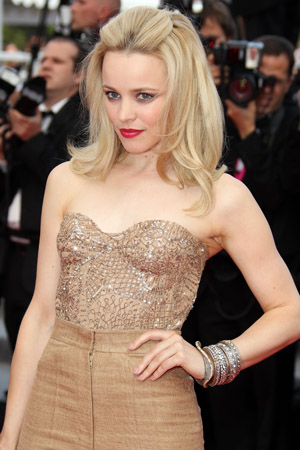 It’s pretty easy to hate Rachel McAdams: She’s beautiful, has perfect hair and used to date our future husband, Ryan Gosling. We can’t hate on her anymore, though, because she actually had a normal job as a teen.

“It was a great place to work, but I had a little bit of an OCD thing with hand washing and just didn’t have time,” the star of the upcoming film The Vow told Glamour of her job at McDonald’s. “They were like, ‘Hey, the drive-through’s backing up. Stop washing your hands!’ I was not a great employee; I broke the orange juice machine one day.”

McAdams got the gig because her sister was a manager at the omnipresent chain. She ended up working there for three years — that’s a lot of hand washing!

“I was 16 and directing kids’ theater, which didn’t totally pay the bills,” she explained of why she took the job.

We’d expect all of that time at Ronald McDonald’s house would keep The Notebook star from eating anything resembling a McRib. However, vegetarianism didn’t agree with her.

“I was [a vegetarian] once, but it made me very tired. I just ate pasta — I was the most unhealthy vegetarian ever! I’d like to try it again now that I know about quinoa and bulgur. I think I’d be better the second time around.”

Maybe she’ll learn about quinoa and open a vegetarian restaurant. After all, food preparation is just as natural to her as acting. “I wouldn’t mind running a restaurant. I’m not an amazing cook, but I can follow a recipe,” she told the magazine, adding that she took knife classes to learn how to properly use cutlery.

“I really wanted to learn the proper way to julienne a carrot. And now I can, and I love it,” she joked, though we’re not going anywhere near her when using one.

“The big one,” McAdams added of her favorite type of knife.