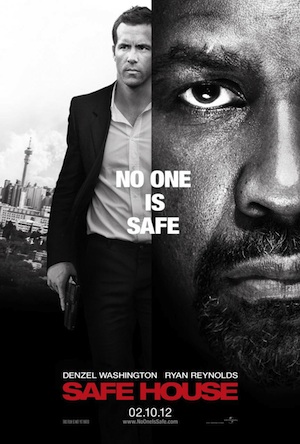 The new poster for the sexy Ryan Reynolds‘ thriller Safe House has fans drooling. The Universal Studios picture is sure to be an exciting ride: It chronicles Reynolds as a rookie CIA agent working alongside rogue CIA operative Denzel Washington when their safe house in South Africa is attacked.

While the first poster didn’t even show Ryan Reynolds, the latest promotional poster for Safe House certainly does (pictured right). The film is directed by relative unknown Daniel Espinosa, and marks his U.S. movie debut. It also stars Up in the Air and The Departed actress Vera Farmiga and Academy Award nominee Sam Shepard.

2012 is gearing up to be a big year for the handsome 35-year-old Reynolds. Ryan Reynolds spent this past Thanksgiving with gorgeous girlfriend, Gossip Girl star Blake Lively, and her family in Utah. Lively and Reynolds then traveled to Ryan’s native Vancouver to spend Christmas and New Year’s with his family. It certainly looks like things are getting serious for the genetically blessed couple.

People magazine reports Lively has also been spending a serious amount of time in Boston where Reynolds is filming another action movie, R.I.P.D., which is scheduled for release in 2013.

Ryan ended his marriage to actress Scarlett Johansson in 2010 after just two years. Reynolds was briefly linked to Sandra Bullock back in January 2011, prior to getting cozy with Blake in October 2011. Ryan was named People magazine’s “Sexiest Man Alive” in November 2010.

Check out the trailer for Safe House below. The film is slated for release on Feb. 10, 2012.

10 Stars we want to see hook up in 2012
Are Blake Lively and Ryan Reynolds moving in?
Scarlett Johansson says naked pics were for Ryan Reynolds