Demi Moore has joined the cast of Lovelace, a big screen biopic about the life of adult film darling Linda Lovelace. Moore, an activist against human sex trafficking, will play feminist Gloria Steinem in the feature. 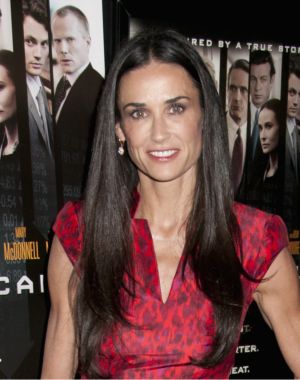 Demi Moore has been cast as feminist Gloria Steinem in Lovelace, one of two planned biopics about the life of late adult film star Linda Lovelace (born Linda Boreman).

Lovelace died of injuries she sustained in a car accident in 2002.

The Steinem part isn’t that far removed from Demi’s reality. The Striptease actress, 49, is a devout philanthropist and an outspoken spokesperson against human sex trafficking. Lovelace will be the actress’ first role since she announced her split from husband Ashton Kutcher in November.

Amanda Seyfried will play the title role in the upcoming movie, which is being produced by Millennium Films in cooperation with Lovelace’s estate. Peter Sarsgaard will portray Lovelace’s battering spouse, Traynor. James Franco has been tapped as Playboy magazine founder, Hugh Hefner.

Cameras started rolling on Lovelace in Los Angeles late last month. The film has an estimated budget of $10 million. A release date has not been set.

The other Lovelace project, Matthew Wilder’s Inferno: A Linda Lovelace Story, is due in 2013. The movie is based on Lovelace’s bestselling autobiography. Malin Akerman was cast in the lead role in that feature after Lindsay Lohan dropped out.

Is Demi a good choice to play Gloria Steinem?