Olympic skater Johnny Weir has tied the knot with his boyfriend over the weekend, the champion confirmed on Twitter. 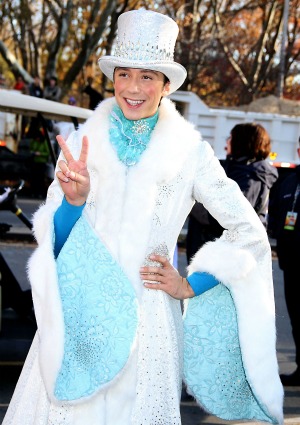 Skating champion Johnny Weir has tied the knot! The flamboyant figure skater wed his longtime friend Victor Voronov on New Year’s Eve — and he announced the news on Twitter.

“It’s cold, dark and very early, but something wonderful is afoot,” Weir wrote on Dec. 30. His next tweet, on Dec. 31 confirmed the news. “I’m married!” he wrote.

The couple is believed to have tied the knot in New York State, where gay marriage was legalized last spring. Weir’s later tweets referenced leaving JFK Airport en route to Punta Cana for the couple’s honeymoon.

Think it’s strange that such a flamboyant character would have such a low-key wedding? Never fear — this one was just to get the formalities out of the way. Hey, they can take the write-off on any New York State income taxes for all of 2011!

“Wedding in summer!” Weir tweeted. “But all the official stuff is done now! No more livin’ in sin!”

The skater actually leaked the news on Dec. 29 to IceNetwork.com. “I’m getting married on New Year’s Eve,” he said.

Read on for more celebrity weddings on SheKnows >>

“His name is Victor [Voronov], he’s kind of everything that I’ve ever looked for and aspired to be in a relationship with. We’ve known each other for a long time and we reconnected over the summer, and it’s just been a whirlwind. I’m very happy with my personal life and also my professional life, and I thank God I can be exactly where I’m at.”

“He’s wonderful. He’s totally not in my field at all,” Weir said. “He didn’t even know I was a figure skater when we first met or even when we reconnected. He is Russian. He worked in [New York City] for a long time, and then he went back to Atlanta to do work for his family, and in a couple of weeks he’s moving back up to New York. He’s a lawyer. He’s in the legal field, completely separate from all of my razzle dazzle.”

Johnny Weir competed in the 2006 and 2010 Winter Olympics and is a former U.S. figure skating champion.