Ellen Barkin is claiming police brutality after alleging she was shoved by cops trying to contain the Occupy Wall Street rally. Watch her video and see what happened. 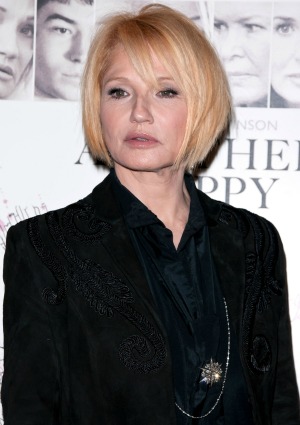 Ellen Barkin is channeling her inner NWA fan today singing “F**k the Police” after a run-in with the NYPD last night left her ranting against the cops and City Hall on Twitter.

Barkin said she was minding her own business along the Occupy Wall Street protest when a cop shoved her off the sidewalk for no apparent reason.

“Just threatened on my street by NYPD, cop shoved me, both hands, onto sidewalk.. Is it a crime 2 stand in the street in NY? WTF is going on here?” Barking wrote on Twitter.

The star of Another Happy Day said she also saw cops arrest a woman for simply being in the wrong place at the wrong time.

“I have never been afraid of an NY policeman until last nite. What I saw was random & senseless arrests and unnecessarily threatening behavior.”

“I was trying 2 make my way 2 young girl they had thrown in2 the van. She was not a protester. Was not drunk. She was walking home,” Barkin wrote.

The Tony Award-winning actress had enough rage to go around — she also pointed the finger at New York’s Mayor Bloomberg and all of City Hall for creating the environment that let this happen.

“F*** all of u, Bloomberg & every1 goose-stepping behind u. I cannot believe what I am seeing. U protect nothing. U ARE the violence in my city.”

Despite her outrage, a video of the incident shows that she might be “Barkin” up the wrong tree. It appears as though the cop in question did not actually push Barkin anywhere, let alone down onto her knees — he simply guided her back onto the sidewalk after she got in his face.

Watch Ellen Barkin versus the NYPD:

Tell us: Is Ellen Barkin exaggerating her NYPD run-in?