Kim Kardashian spent New Year’s Eve hosting a party at TAO Las Vegas with her mom Kris Jenner. Find out what the soon-to-be-divorced star said about finding love in 2012. 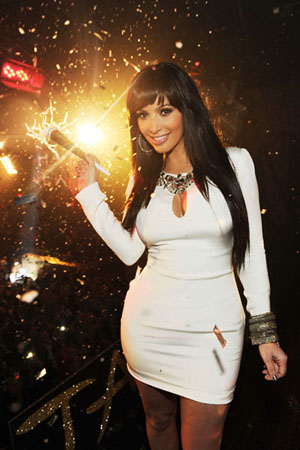 Kim Kardashian rang in 2012 at a paid hosting gig at TAO Las Vegas with her mom Kris Jenner.

“It’s a tradition to ring in the New Year here at Tao!” Kim said, looking amazing in a white Gucci long sleeve mini dress, Loren jewels and Christian Louboutin heels. The Keeping Up with the Kardashians star also showed off her new sleek bangs and pin-straight hair.

Kim, who reportedly earned $60,000 for her hosting gig (according to TMZ), partied the night away with her mom Kris, who wore a Dolce & Gabbana tuxedo outfit, and her Dancing with the Stars partner Mark Ballas. Prior to the festivities, the group dined in a private dining room at TAO where Kim sipped on Midori cocktails.

After a year filled with an extravagant wedding — followed by a divorce just 72 days later — it sounds like one of Kim’s resolutions is to find love again.

“I am ready to move forward and not look back. I learned a lot of about myself this past year and at the end of the day you always have to trust your gut,” Kim said. “You’ve got to believe in love. I still do.”

After dinner, the group then made their way to the nightclub, where Kris surprised Kim by having DJ Ross One play Kim’s song, “Jam.” As the midnight hour drew closer, Kim took to the stage. 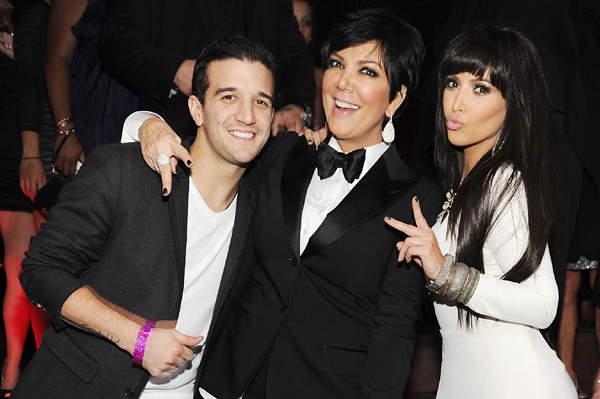 The crew continued partying into the night, with Kris and Mark stealing the show as he dipped her and spun her around.