Mariah Carey is shooting for The X Factor. We hear the diva mom is working out a deal with series creator Simon Cowell that will see her replace Nicole Scherzinger as a judge on the popular Fox singing competition. 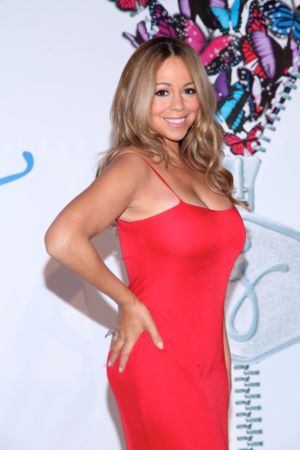 The diva mama — who recently dropped 70 pounds with a little help from Jenny Craig — is in secret chats with acid-tongued series boss Simon Cowell to replace Nicole Scherzinger as a judge on The X Factor, according to new reports.

“She wants to be a judge and she has been in secret talks with Simon. The two are good friends and she promised to help pull in monster ratings this coming season,” an insider divulged to The National Enquirer this week.

Last April, Mr. Nasty — Cowell — confirmed that the then-pregnant-and-ready-to-pop singer would have “some type of role” on the Fox singing series — though he was mum on details.

“I think Mariah will have a role on the TV live shows,” Cowell told Spokane, Washington DJ Jackie Brown on her radio show on Friday.

“I met her recently and she was on great form. And her idea was to be the judge of the judges, which only Mariah could come up with. She’ll be involved in some form. I literally adore her. I love her to bits.”

Mariah had been tapped to make various guest appearance on The X Factor stage during the show’s first season, but bowed out in favor of caring for her twins, Monroe and Moroccan.

“Now she’s gunning for a seat at the judge-mentors table. She was holding out until she knew she looked her best and is chomping at the bit for Simon to sign her up,” the tabloid tattle added.

Rumors that Nicole will vacate her seat on the judges’ panel first surfaced last month. The soft-spoken songstress sparked controversy over her inadvertent role in the premature elimination of wildly-popular teen powerhouse Rachel Crow.

The former Pussycat Doll, 33, has been bombarded with hate mail from fans of the 13-year-old aspiring pop tart ever since. Scherzinger has told friends she’s distraught after becoming the victim of vicious internet “trolls,” who’ve unleashed an online backlash against her in the wake of Rachel’s departure.

“She’s had a hard year,” says one pal. “The X Factor hasn’t been the blessing she thought it would be. Life isn’t good for her right now.”

When asked about her future with the show during a press conference last month, Nicole confessed her discomfort with judging.

“I’ve had a lot of fun this season. The reason I took this job is I wanted to mentor, first and foremost… It has been very hard on me, the elimination process. It’s something I could never have been prepared for,” she said.

Officially, a show rep tells People, “No discussions have been had and no decisions will be made about any contracts until the New Year.”

We suppose that means we can expect to hear more about Mariah’s role on the show sometime in the coming weeks. Keep your ears open.

Do you think Mariah Carey would be successful as a talent show judge?