Tom Cruise does it again. He manages to get people away from their big screen TVs during the cold holiday season to see him do the unthinkable in Mission: Impossible — Ghost Protocol. Hooray! 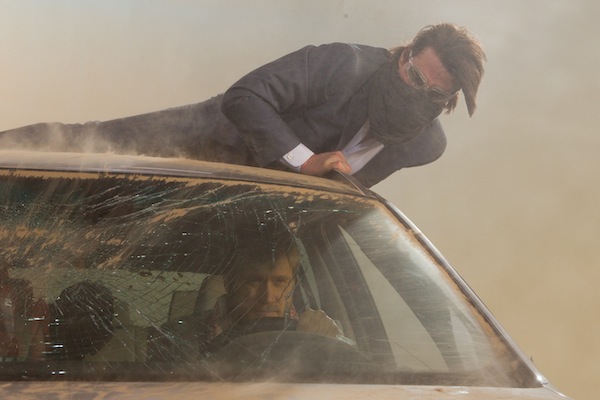 Mission: Impossible — Ghost Protocol, the fourth installment in the successful TV-show-turned-film-franchise-series, maintained its number one status for the third week in a row, grossing an estimated $40 million for the four-day holiday weekend, according to Variety. The film starring Hollywood megaman Tom Cruise passed $100 million in domestic earnings on Thursday and $200 million internationally on Friday, according to Deadline Hollywood.

The Jude Law and Robert Downey Jr. dynamic duo mystery action film Sherlock Holmes: Game of Shadows held onto the second spot with an estimated $22.1 million for three-day weekend estimates, according to Variety. Monday’s earnings were not factored into this estimate.

Movie review: Sherlock Holmes: A Game of Shadows is gritty, witty and fun >>

Alvin and the Chipmunks: Chip-wrecked maintained its third place ranking, earning an estimated $18.3 million for three days. The adventure musical starring Jason Lee is the third episode in a series of recent live-action-animated hybrid films about the adorable singing chipmunks, Alvin, Simon and Theodore.

Movie review: Jason Lee is marooned in Alvin and the Chipmunks: Chip-wrecked >>

In a surprise trot upwards in ranking, War Horse increased significantly vying for the fourth spot with $16.9 million for three days. Directed by Steven Spielberg, the World War I drama is about a boy who is separated from his horse due to combat.

Movie review: The beautiful story of one amazing War Horse >>

The Girl With the Dragon Tattoo was close behind with an estimated $16.3 million for three days, coming in fifth. The film adaptation of the successful novel of the same name stars Daniel Craig and Rooney Mara in a dark, emotional murder mystery that takes place in chilly Sweden.

The Cameron Crowe-directed heartwarming comedy starring Matt Damon and Scarlett Johansson, We Bought a Zoo, didn’t pull up as much as hoped but it maintained interest among moviegoers and will likely round out the top 10 along with the ensemble romantic comedy New Year’s Eve which also increased numbers this weekend.

The Muppets and The Adventures of Tintin are also projected to maintain top 10 status. Final figures will be available following Monday’s box office activity. As for now, 2012 is off to a great movie year, with ticket sales up from last New Year’s Eve holiday weekend. Pop a cork, everyone, this holiday season is done!