Are you in the mood for a love story? Look no further! We’ve compiled a list of some of the most romantic movie scenes, all guaranteed to make you swoon. 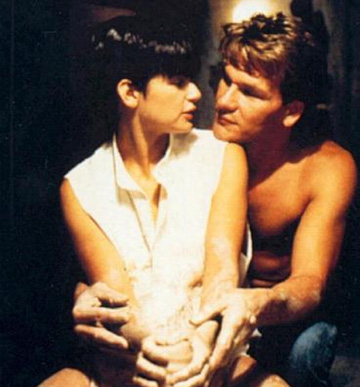 Grab your tissues! Patrick Swayze’s character dies much too young and leaves behind his one great love, played by Demi Moore. He tries to move Heaven and Earth (literally) to be with her again, and pretty much succeeds as she makes pottery. He places his hands on hers and together they make something beautiful (and we’re not talking about the clay!). For just a moment, you forget that he’s not really there at all.

You spend the entire movie wishing these two best friends would realize they are perfect for each other, and finally get your reward at the movie’s end. Harry finds Sally in a sea of New Year’s Eve party-goers just as the clock is about to strike midnight, and tells her everything he loves about her (including all of her perfect imperfections) as the balloons and confetti fall from the sky.

10 chick-flicks that never get old >>

You know this is coming from scene one. This mighty ship has gone down, and lovers Jack and Rose can think only of each other. She gives up her spot on the life boat to get to Jack, but in the end he makes the ultimate sacrifice — giving up his life for hers. As Jack clings on for life in the freezing water, the two share last words and frozen kisses while they wait for the end they both know is near.

Who wouldn’t want to be serenaded, especially by John Cusack? If you’re a sucker for anything ’80s, this iconic scene, where Cusack’s character hoists the giant boom box over his head in a last-ditch effort to win over his love, is probably one of your favorites. They’re both still reeling in pain from their breakup, and the special song he plays helps bring them back to what really matters.

What’s not romantic about this movie? There are so many heart-stopping scenes, it’s difficult to pick just one. One of the most moving moments of the film, however, comes at the end. Just before time runs out, Allie remembers who she is and her life with Noah. After a lifetime of loving each other, the couple dies together as well, knowing that life without the other wouldn’t be worth living. This movie gives us hope that true love really does transcend everything else.

If it wasn’t so romantic, it would be downright cheesy. After his son spends the movie playing matchmaker, Tom Hanks’ character heads to the top of the Empire State Building (with his son in tow) to see if the lady he loves will decide to show. She has a fiance and a life all planned, but risks everything to try for a chance at true love.