Hugh Hefner is putting the past year behind him and looking forward to a romantic and successful 2012. Here’s what the Playboy icon has to say about his sexy new year. 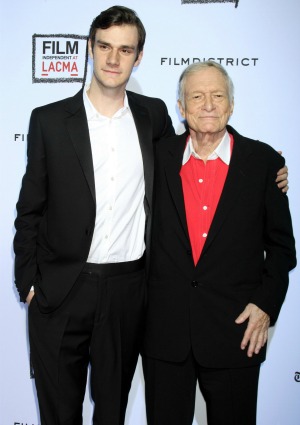 Some 85-year-olds may spend their days playing bridge at the retirement home — but they aren’t Hugh Hefner. The Playboy mogul says that 2012 is shaping up to be one of his most successful in recent memory — and he is leaving room for romance, too.

“Retirement is unthinkable to me,” Hef told the Associated Press. “The future is bright and very exciting and I’m looking forward to playing a part in it.”

Despite the cancellation of both his TV show, The Playboy Club, and his wedding to Crystal Harris, Hef says business and pleasure still have a lead role in his life.

“I don’t know that I would be best served at married (life),” he said. “But I do know that I need an ongoing romantic relationship.” Hef is currently healing his broken heart with two new 25-year-old girlfriends, Playboy models Shera Bechard and Anna Berglund.

Hef is getting some help from his son, Cooper Hefner, in breathing new life into the Playboy brand, including reopening branches of The Playboy Club around the world, sponsoring a short film contest and lighting a fire under a previously shelved biopic of his famous dad.

“Most people’s lives, if they are successful, have a peak and then it’s a bell-shaped curve, or they have wonderful years and then a slow dissipation. The opposite has been the case here,” Hefner noted. “I’m the luckiest guy, from my perspective, the luckiest guy on the planet.”

“If you can do that and make some real difference in the world, it’s too sweet.”