Alex Rodriguez is dating yet another buff blonde — and this time it is former pro wrestler Torrie Wilson. 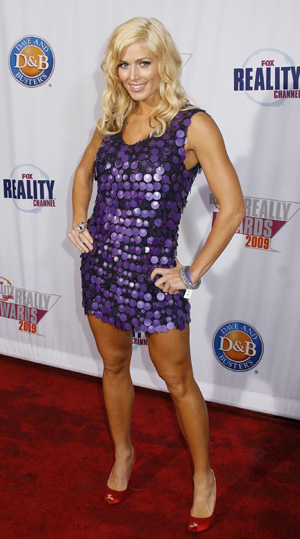 New York Yankees star Alex Rodriguez has a type and it is gorgeous, blonde and buff! The notorious bachelor has dated Madonna, Kate Hudson, Cameron Diaz and has recently been seen with 36-year-old former WWE star Torrie Wilson.

Wilson, who posed for Playboy in 2004 and was a runner-up on the reality show I’m a Celebrity…Get Me Out of Here, was spotted with Rodriguez at Axiom Fitness in Boise, Idaho.

“He just kind of rode the bike and signed autographs for people,” Axiom’s assistant manager, Dax McIntosh, told the Idaho Statesman. “He was real cordial.”

A local news anchor was also at the gym and spotted the Yankees slugger. “I did speak with him briefly,” Mike Murad said. “He didn’t tell me why he was here, but did tell me he was trying to keep a low profile.”

The couple was also seen riding bicycles in Miami and vacationing with another notorious bachelor — George Clooney!

Rodriguez and Wilson were spotted in Cabo San Lucas, Mexico with Clooney and his wrestler girlfriend, Stacey Keibler.

Rodriguez, 36, split with Cameron Diaz in September, after dating for one year (and shortly after cameras caught the actress feeding him popcorn while watching a game).

“She’s very busy with her career,” a source told US Weekly of the split. “And he’s had injuries and wants to focus on his game. They’re dedicated professionals.”