Will Jennifer Aniston and Justin Theroux elope? An insider reveals all the details of the couple’s intimate New York wedding. 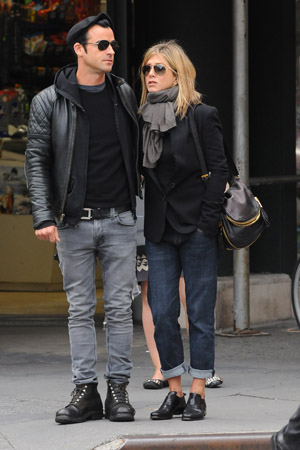 Will Jennifer Aniston, our favorite “girl next door” finally get married again? The actress and her boyfriend, Justin Theroux, are reportedly planning to elope!

OK! magazine reports that they are planning to elope, not to a tropical destination, but New York!

“Originally they wanted to fly everyone to Cabo San Lucas, Mexico, for a small, barefoot-on-the-beach ceremony, but that plan was scrapped after the details were leaked,” the insider reveals. The couple will reportedly honeymoon in Mexico, with the One&Only Palmilla being Aniston’s favorite place to stay.

Why did the couple settle on New York for their wedding?

“Justin is all about New York,” the insider says. “He moved there right after college and has never stopped loving it.”

They plan on having a party after their private ceremony and inviting their close friends and family, which will include Chelsea Handler, Ben Stiller, Robert Downey Jr. and yoga guru Mandy Ingber. It is interesting to note that Aniston’s former BFF Courteney Cox is not on the list.

Her mom didn’t attend her wedding to Brad Pitt; however both parents will see her tie the knot this time. “While she and Jen still have issues, they’re getting on really well,” the source says.

Aniston will reportedly wear a Carolina Herrera wedding dress, which has been described as “very classic.”

“She’s fallen in love with a caramel shift design and an off-white column style,” the source reveals.

Aniston and Theroux are planning on “writing their own vows,” and the actress has “already written hers countless times.”

No word on the exact date this rumored wedding will take place, however sources are saying it will happen soon.

“They are both incredibly excited,” says the insider. “Jen can’t believe it’s actually happening. Jen’s in a super place at the moment. She’s on an all-time high.”