Film buffs will love the poster created for the 2012 Oscars as it pays tribute to the classics from the past seventy years.

The poster for the 84th annual Academy Awards (pictured below right) was unveiled yesterday with the poignant taglines: “Celebrate the movies in all of us,” and “Life. Camera. Action.” 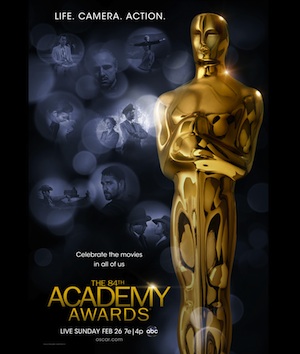 The poster features images from iconic movies and characters, both loved and hated, from previous “Best Picture” winners:

Marlon Brando from The Godfather (1972)

Julie Andrews from The Sound of Music (1965)

Clark Gable and Vivien Leigh from Gone with the Wind (1939)

In addition, one image is from a “Best Director” win:

Academy of Motion Picture Arts and Sciences president Tom Sherak discussed the emotional and creative thought behind the poster, “Whether it’s a first date or a holiday gathering with friends or family, movies are a big part of our memory. The Academy Awards not only honor the excellence of these movies, but also celebrate what they mean to us as a culture and to each of us individually.”

Promotion for the 2012 Oscars is well under way. Movie theatres will receive the above pictured poster along with other promotional materials beginning Jan. 6, 2012. Theatre guests will even be able to see a special Academy Awards theatrical trailer.

The Oscars is the oldest award show in entertainment history and is often regarded as the highest form of achievement for the cinematic industry. While the first ceremony in 1929 was not televised, the event has become an annual telecast tradition viewed in over 220 countries.

2012 Oscar race begins: The ballots are in the mail
Who bought Orson Welles’ Citizen Kane Oscar?
Ben Stiller says comedians get no love from Oscar