Elle Fanning might be the little sister, but she has a big role to fill: family fashion maven. Read how her sister Dakota Fanning says her little sis fills it perfectly. 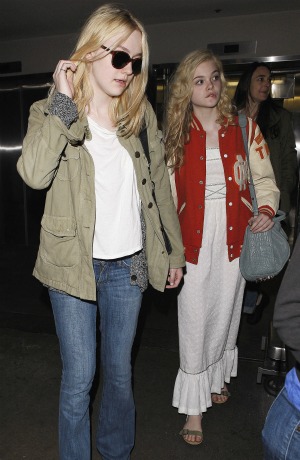 Dakota Fanning might be the best known actor in the family, but her little sister Elle Fanning is quickly catching up — and she has one skill even her big sis will concede. Turns out Elle is the family fashion maven!

The two told Teen Vogue that Elle is totally obsessed with fashion, and Dakota now turns to her for sartorial guidance despite being the big!

Dakota Fanning creeped out by own ad >>

“I remember the first time Dakota asked me for fashion advice about what to put with what,” Elle told the mag. “I was like, My big sister is asking me?”

“It’s funny, ’cause when you’re an older sister, you try to be the leader and example, and I’ve recently had to accept that we’re equals,” Dakota said. “The day has come when I actually need her help. I’ve had to admit that to myself and break down and be like, ‘Little sister, does this look good?'”

But that doesn’t mean there are no closet wars between the two. “She steals my clothes!” Dakota revealed.

“As far as I’m concerned,” Dakota continued, “there’s a no-closet-sharing policy, but as far as Elle is concerned… I’ll go in my room, and there will be clothes on the floor, clothes missing, clothes that are now in her closet.”

“Last summer,” she says, “I was in London working on a film, and I was looking online and these pictures came up on my homepage. She was in my hat, my dress, my shoes. I called her up and was like, ‘I caught you! They photographed you wearing all my stuff. Put it back!'”

Did Elle listen? No way. “She hung up on me!” Dakota laughed. “She didn’t care at all.”

Read the entire article with Elle and Dakota Fanning on TeenVogue.com.