Zooey Deschanel and Joseph Gordon-Levitt not only look good together — they sound fantastic! Listen as the 500 Days of Summer co-stars duet. 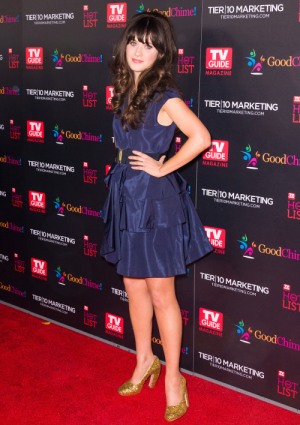 Joseph Gordon-Levitt and Zooey Deschanel are making sweet, sweet music together. The pair, pals for over a decade, bring us a homemade video cover of Nancy Wilson’s “What Are You Doing New Year’s Eve?” Watch below!

Gushing over her duet partner Zooey Deschanel writes on HelloGiggles, “I have known Joe Gordon-Levitt for going on 12 years. We first met in the summer of 2000 while doing a tiny movie called Manic, where we bonded over a mutual appreciation for Harry Nilsson and Nina Simone and I have been lucky enough to call him one of my dearest friends ever since.”

The singer and actress, who recently announced plans to divorce Death Cab for Cutie husband Ben Gibbard, went on to say, “When we did 500 Days of Summer eight years later, we spent every lunch hour dancing to Marvin Gaye in the hair and make up trailer; we had loads of fun. I hope to do a thousand more movies with him because he’s simply the best.”

Sounds like a certain freshly single New Girl may be smitten! Described as “a match made in hipster heaven” Zooey Deschanel and Joseph Gordon-Levitt made SheKnows’ list of 10 stars we want to see hook-up in 2012!

You may have also spied the pair together in the 2009 music video for “Why Do You Let Me Stay Here?” for her band She & Him. The video depicts a bank robbery in which which the teller’s heart is stolen along with the cash.

Check out Zooey Deschanel and Joseph Gordon-Levitt’s “What Are You Doing New Year’s Eve?” here!

Tell us already! What are you doing for New Year’s Eve?