Alessandra Ambrosio had a big secret to keep at the latest Victoria’s Secret fashion show — she was pregnant — and trying to hide a growing bump! 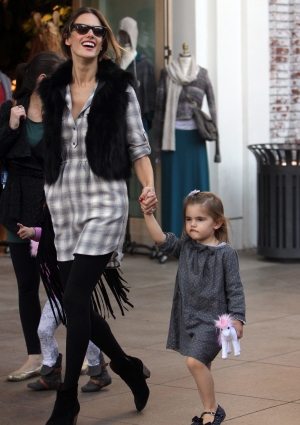 Alessandra Ambrosio had more on her mind than strutting her stuff on the runway at the Victoria’s Secret Fashion Show last month. Would anyone spy her growing baby bump?

The 30-year-old Victoria’s Secret Angel, who was two months pregnant when the show taped, explained to Us Weekly, “When I first found out I was pregnant I thought, ‘Oh my gosh I don’t think I’m going to be able to walk on the show,’ and I didn’t tell anybody so no one knew at the show that I was pregnant.”

Alessandra Ambrosio continued, “A week before, I told my booker I don’t think I’m going to be able to fit into the clothes because I gained a few pounds already, but we were just quiet. I cut all the sugars and sweets 10 days before and I got my trainer — the one I usually get — and we were doing lots of glutes and arms and back exercises.”

It worked! No one, or at least not many, knew of Alessandra Ambrosio’s pregnancy until Thursday when she announced the news publicly.

If a svelte body and amazing looks don’t already have you green with envy over the Brazilian model, this next part may put you over the edge. Ambrosio went on to gush, “I love being pregnant! My body loves to be pregnant. I don’t feel nauseous. I get a little more hungry but I just feel great.”

“I’m thrilled,” the mother to 3-year-old daughter Anja, pictured here on Dec. 12 added of her pregnancy news. “I always wanted to have a big family so it was definitely my plan to have another baby.”