Nick and Vanessa do not have The X Factor. Vanessa Minnillo, the new co-host of the ABC show Wipeout, says she and new husband Nick Lachey auditioned — and were turned down — for the hosting openings on Simon Cowell’s singing competition, The X Factor. 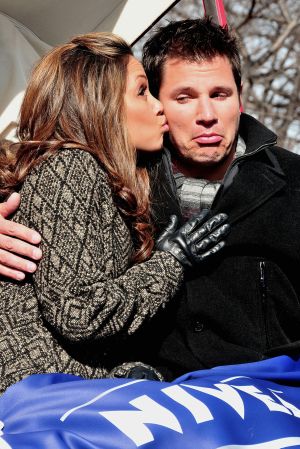 They’ve got love, but they haven’t got The X Factor.

It’s no secret: Steve Jones hasn’t exactly won rave reviews for his delivery as host of the Fox talent show The X Factor. (USA Today pundit Robert Bianco once called the 34-year-old Welsh presenter “as charmless as a Ken doll and even less animated.”)

And it appears recently-wed couple Nick Lachey and Vanessa Minnillo are the only two personalities in Hollywood who would have been even less endearing.

The one-time Miss Teen USA says she and her husband auditioned for a pair of hosting openings on Simon Cowell’s singing competition last year — only to be unceremoniously snubbed.

“They went with a British guy [Jones]. You can’t be more polar opposite, so I am OK with that. Now if the host was a brunette girl in her early 30s, I would be like, ‘Wait a minute!'” Vanessa told The New York Post Thursday.

Minnillo has been tapped to take over as host on the popular ABC show Wipeout next month. Lachey, a former boy bander, presently fronts NBC’s acapella contest The Sing-Off. But the newlywed admits, the chance to work together made the X Factor gig a desirable one for the pair.

Nick Lachey is dragging his feet on babies >>

Fox isn’t talking, but the blogosphere is abuzz with reports that Steve will not return to host The X Factor when the show kicks off a second season in the fall.

Will Nick and Vanessa take another stab at an audition? Eh — not likely, she says.

Vanessa will join Wipeout hosts John Anderson and John Henson in delivering sideline commentary as a replacement for hostess Jill Wagner, who departed the series after its fourth season wrapped up last summer.

Mrs. Lachey was approached by series creator and executive producer Matt Kunitz as a possible host for the show three years ago. She passed on the gig in favor of concentrating on developing an acting career.

“Had I not passed on that, I would never have had the four or five years of acting and classes and eventually getting married. When this came around again, it was like, ‘This is meant to be.'”

The sometimes actress most recently fronted a season of the ABC reality competition True Beauty.