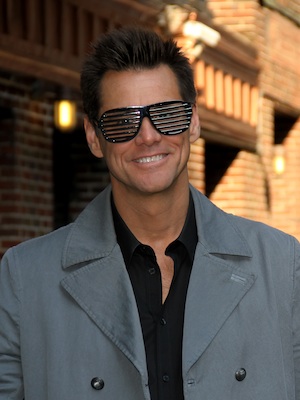 49-year-old Jim Carrey is getting close with a much younger girl, a 29-year-old student named Anastasia Vitkina. Here’s hoping this odd relationship can help Carrey get his love life back on track.

A source for Us Weekly reports the pair has been spending a lot time together over the past few months in New York and California, most recently at a Guns N’ Roses concert in Los Angeles. Photos surfaced of the pair holding hands as Anastasia walked behind Carrey in skintight leather leggings and sky-high Christian Louboutin heels.

Carrey and Jenny McCarthy ended their five year relationship back in April 2010. McCarthy, who is 39 years old and still a decade younger than Carrey, moved on with sports agent Paul Krepelka, but they called things off earlier this year. She’s now trying online dating in pursuit of a new love.

Jim Carrey seems to be romantically struggling since his intense split with McCarthy. He was spotted in January 2011 with 24-year-old America’s Next Top Model contestant Anchal Joseph but things never got serious. Even more bizarre, over the summer Carrey uploaded an odd video confessing his love for 23-year-old actress Emma Stone. He ends the virtual sonnet by explaining the pair could never date given their significant age difference — Carrey’s almost 30 years her senior.

A native Canadian, Jim Carrey has been married twice and has one child, Jane, born in 1987 from his first marriage. His second marriage to Dumb and Dumber actress Lauren Holly lasted only a year.

So what does the 29-year-old Anastasia Vitkina possess to make Jim Carrey swoon for a girl just a bit older than his daughter? Vitkina is the ex-girlfriend of one of Carrey’s longtime friends, which might make the age gap a little less severe since the two were previous acquaintances.

As for Anastasia’s background, The International Business Times reports she studied at Parsons The New School for Design in New York, but it’s not clear what her academic path is at NYU.

Who knows, maybe Jim Carrey and Anastasia Vitkina will prove us wrong, but somehow we don’t think this duo is in it for the long haul.