Kate Hudson, Heidi Klum, and Paris Hilton were spotted this past Christmas lounging around the ultra-posh Aspen, Colorado.

While the rest of us spent the holidays with crazy family members and feigned excitement over lame gifts, the rich and famous lived it up in ritzy Aspen, Colorado. A favorite Christmas destination for those with five-star tastes and millions in the bank, a few lucky tourists were able to witness Kate Hudson, Heidi Klum, and Paris Hilton relax in style.

Kate Hudson continued a longstanding family tradition when she hit up Aspen’s posh stores and renowned ski slopes with fiancé Matthew Bellamy and sons Ryder, 7, and Bingham, 5 months. The 33-year-old actress (pictured below) was seen grabbing some last-minute gifts on Christmas Eve from J. Crew.

It’s hard to believe Hudson just gave birth in July to son Bingham! While Ryder and Kate were spotted on ski lifts throughout the holiday trip, little Bingham was nowhere to be found. He was probably kept safe from prying paparazzi, as Hudson and Bellamy are notoriously protective of him. 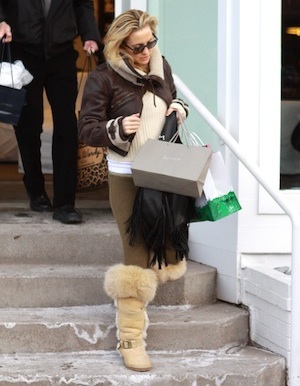 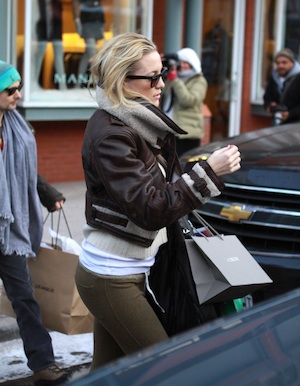 Clearly vying for some attention, Paris Hilton (pictured below) rocked a bold Pucci down jacket with matching accessories. Sister Nicky Hilton was much more understated in a chic beret, plaid scarf and skinny jeans. Does Paris look like a blast from 1999? 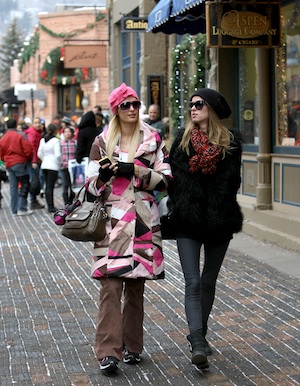 The Hilton sisters arrived via private jet and, upon arrival, Paris seemed excited to spend some quality time with her family. She tweeted, “Just landed in Aspen with @KathyHilton @NickyHilton @ConradHilton @BarronHilton @VanessaDubasso, my dad & Tinkerbell. Love my #family.”

Later on she posted, “Having the best time skiing with my dad in #Aspen. #FatherDaughterDay 🙂 Feel so lucky to have such an amazing dad, love him so much” And, “Love skiing down the mountain blasting @DJAfrojack @David Guetta & @Kaskade on my Ipod. It’s like clubbing in the snow.”

Aspen seems to be a low-key stop for Paris, as People reports the socialite jetted to the mountain town after a whirlwind European tour, visiting Italy, France and Slovenia. She left Aspen this past Sunday, tweeting, “Feels so good to be home! All my pets are so happy and excited to see me!”

Heidi Klum also enjoyed the holidays in the lap of luxury along with husband Seal and their four children (pictured below). The family spent their vacation skiing, sledding, and basking in the beautiful sunny weather. Heidi certainly had no trouble squeezing into her high fashion ski gear, as the supermodel is extremely dedicated to fitness. At one point, photographers spotted the group as they were chauffeured down a ski slope on their way to a leisurely lunch after they spent the morning hitting the slopes. 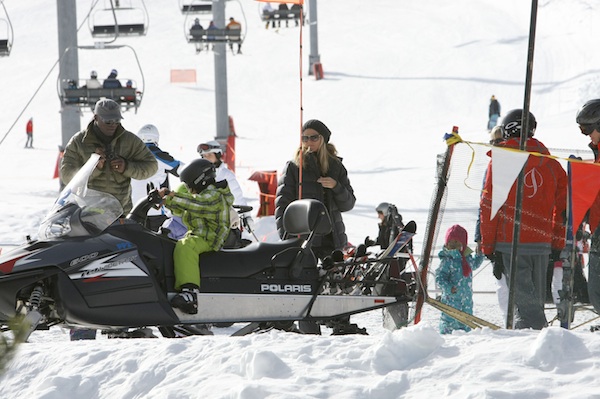