Crystal Harris is a meanie who just wants attention and that’s why she won’t give Hugh Hefner the dog back, say his former girlfriends. What did the Girls Next Door have to say?

Crystal Harris dumped Hugh Hefner days before their wedding and kept the pricey engagement ring and an even pricier Bentley, and yet the gal still isn’t satisfied. Harris wants Hefner’s dog — and his former flames are stepping in to stick up for the man who made them famous. 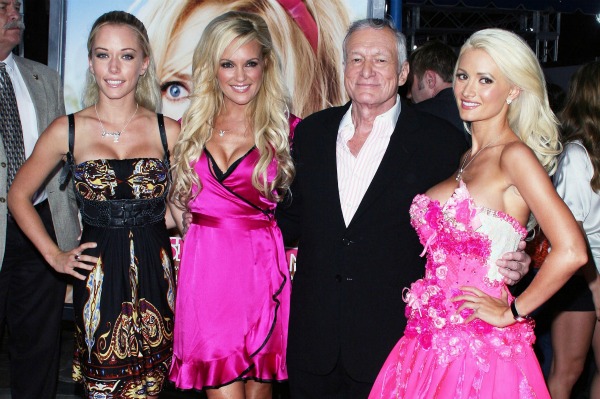 “I told Crystal she could keep the engagement ring and Bentley (a wedding gift) if I could have our puppy [Charlie],” the 85-year-old Playboy mogul tweeted on Tuesday. “But now she wants all three.”

Holly Madison, who was Hef’s main girlfriend on the hit reality show Girls Next Door and still stands by her former man, tweeted “she left that dog there by choice… @CrystalHarris why did you voluntarily give the dog to Hef (who loves him too) after u left, only to ask for him back a few months later?”

“Dogs shouldn’t be yanked from happy homes on a whim,” she added. “She needs to quit attention-seeking!”

Kendra Wilkinson threw her support Hef’s way too. I’m sorry u have to go through this,” she tweeted. “That dog loves u so much. She abandoned him n now she want him back. She’s mean mean mean.”

Wilkinson also expressed her support via a phone call, according to Hef. “I just received a call from Kendra lending her support in the controversy over the puppy. Love that girl,” he tweeted.

Bridget Marquardt chose to abstain from the debate.

So far Harris’ only response has been to retweet something said by another Twitter user. “RT @bekaJB13 @OHMYGODitsKAT @crystalharris just wants to keep her baby. @hollymadison should but out of everyone’s business.”

Tell us: Who should keep the dog, Crystal Harris or Hugh Hefner?