Michael Lohan collapsed at an AA meeting and has been rushed to a local hospital, witnesses say. Is Lindsay Lohan’s father going to make it? 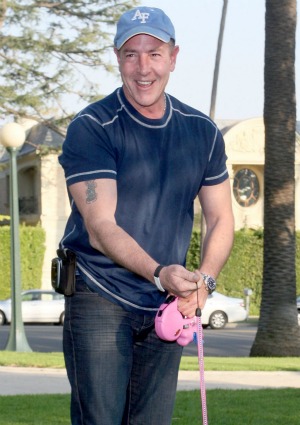 So much for the anonymous part of Alcoholics Anonymous. A source reports that not only was Michael Lohan at a meeting, but the world’s worst stage dad collapsed in the midst of it.

A source told RadarOnline that Lindsay Lohan’s father had some sort of attack on Tuesday.

Lindsay Lohan wants her dad to shut up >>

“Michael started to feel light-headed during his meeting so he walked outside, and that’s when he collapsed,” said the insider.

“He was taken in an ambulance to Palm Beach Gardens Hospital where doctors found another blood clot in his lung.”

The source, who knows enough of the details that it’s probably someone in Lohan’s camp (if not the guy himself), said Lohan was given meds to break up the clot and multiple medical tests to make sure it had not spread to his brain, which could result in a stroke. If you thought he would have already had a stroke after his daughter Lindsay Lohan’s nude Playboy pictorial, you’d be wrong: Daddy couldn’t have been more proud.

“Michael’s still waiting on the test results and we’re not sure when he’ll be released from the hospital,” the source said.

Upon his release from the hospital Lohan will return to rehab where he was ordered by a judge after some domestic drama with ex-girlfriend Kate Major.

Read on for more Michael Lohan