Meryl Streep is one of the most acclaimed actresses in Hollywood history. That’s why it’s no surprise she was chosen for the 2011 Kennedy Center Honors. Several of her friends and former co-stars attended this year’s ceremony, which included a stunning tribute to the acting legend. 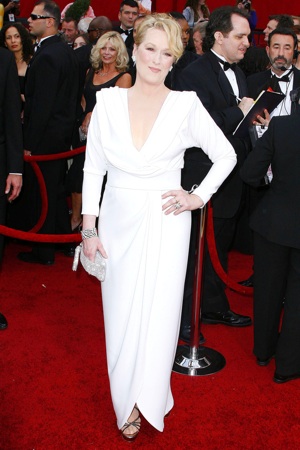 De Niro, who co-starred with Streep in 1978’s The Deer Hunter, took the stage after watching an impressive montage that highlighted her career.

“As an actor looking at those moments of Meryl’s life, my first thought is ‘I was amazing in The Deer Hunter,'” joked De Niro. “I was nominated for an Academy Award for The Deer Hunter, and so was Meryl. That was her first. She’s up to 16 now.”

Over the course of her career, Steep has given life to some of film’s most iconic characters. The aforementioned Linda in The Deer Hunter, Joanna Kramer in Kramer vs. Kramer, Sophie from Sophie’s Choice, Helen Archer in Ironweed and those are just from the ’70s and ’80s!

During the Kennedy Center tribute, Streep heard kind words from director Mike Nichols, whom she’s worked with on four films and a play. Frequent co-star Stanley Tucci also took the stage and declared, “There is one thing I want with me in every scene and that is Meryl Streep.”

Kevin Kline (Sophie’s Choice), Tucci, and his The Devil Wears Prada co-stars Emily Blunt and Anne Hathaway completed the presentation with a rendition of “She’s Me Pal,” a take on Streep’s performance of “He’s Me Pal” from Ironweed.

You can watch Meryl Streep’s Kennedy Center Honors tribute below.