Mistress to the stars Rachel Uchitel is pregnant with her first child. Read on to see how she announced the news. 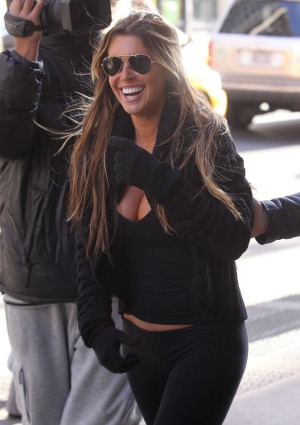 We hope the former mistress of Tiger Woods put some of that $10 million payout she received from the golf star away. Rachel Uchitel has moved on with a new husband — and now they have an expensive new project in the works. Uchitel is pregnant!

“Expecting big things for 2012,” she wrote, tweeting a photo of her husband caressing her baby bump. “Five down, four months to go.”

The timing means that Uchitel was definitely preggers at the time of her wedding, when she coyly told Radar Online that “a baby is in the plan.” Rumors floated that she was with child earlier this year, but she did not confirm the news until this tweet.

Rachel Uchitel: Mistress to the stars >>

Uchitel’s affair with Tiger Woods is said to be the straw that broke the camel’s back in his marriage to Elin Nordegren and opened the floodgates to the news of literally dozens of other flings. The golf champion reportedly paid Uchitel a cool $10 million to keep quiet about their longterm affair — money that will be put to good use when it’s time to send baby to college.

In addition to Woods, Uchitel was tied to tons of other stars during her stint as a Las Vegas club hostess, most notably actor David Boreanaz who admitted he slept with her while his wife was pregnant. Boreanaz and his wife have since reconciled and the Bones star called the fling “a learning experience.”