The good doctors of Seattle Grace were sitting on some delicate news the last time we saw them — news that has yet to make its way to Teddy. Read on to see a preview of Grey’s Anatomy’s midseason premiere.

A protégé ends up with her mentor’s hubby dead on the operating table. A car collides with an ambulance stranded on the road. Totally a Grey’s Anatomy fall finale if we ever saw one — but now it’s time to wrap that finale up into a nice winter/midseason premiere bow. 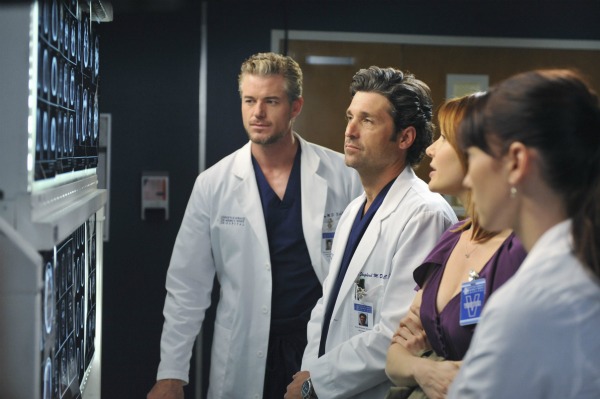 Grey’s Anatomy is returning from a small break on Thursday, Jan. 5, with an episode dedicated to continuing where the fall finale left off: Breaking some bad news to Teddy.

Check out what show was renewed: Whale Wars >>

In the new preview for “Suddenly,” Owen (Kevin McKidd), the Chief (James Pickens Jr.) and Bailey (Chandra Wilson) are shown trying to come up with a way to tell Teddy that Henry is dead despite Cristina’s efforts to same him.

It’s kind of Ironic that Cristina (Sandra Oh) couldn’t save the husband of the doctor she was learning from, isn’t it?

Elsewhere, Meredith (Ellen Pompeo) and Alex (Justin Chambers) deal with the aftermath of the car/ambulance crash.

ABC officially describes “Suddenly” as the following: “A severe car crash involving an entire family results in an all-hands-on situation in the ER, as the eldest daughter is left to make the toughest decision of her life. Meanwhile Teddy, still in the dark about Henry’s death, calls upon Cristina to help with her patient in the O.R., and Lexie finds herself working alongside Mark’s new girlfriend, Julia, during an eye surgery on Grey’s Anatomy, Thursday, Jan. 5 (9:00-10:02 p.m., ET) on the ABC Television Network.”

Have you been following the docs of Seattle Grace? We’re a little more than curious to hear your thoughts on Grey’s Anatomy — past to present.

Do you love the show the same as you did when characters like George and Izzie were roaming the operating room?

Head over to our comments section and sound off and don’t forget to check out “Suddenly.”