Alessandra Ambrosio has another little angel on the way! The Victoria’s Secret supermodel is expecting her second child with businessman fiancé Jamie Mazur. 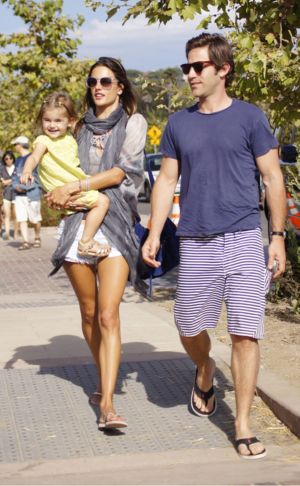 Alessandra Ambrosio has a baby on board. The Brazilian catwalker is pregnant with baby number two.

“Family is the most important thing for me and I’m thrilled to be adding to the family. I’m fortunate to have a loving and supportive family. It’s a blessing that it will soon be growing,” the 30-year-old angel gushed this week.

Alessandra was several weeks pregnant when she strutted down the catwalk in the Victoria’s Secret Fashion Show in November. During the show, Alessandra stripped down to her lingerie to not only display three different runway looks, but also her incredibly toned figure.

The fashion bombshell is four months along and hopes to learn the gender of her unborn bundle of joy during an upcoming ultrasound, scheduled for next month.

The Victoria’s Secret stunner and her fiancé, California businessman Jamie Mazur, have been an item since 2005. They are already parents to a three-year-old daughter, Anja Louise Ambrosio Mazur.

The best thing about pregnancy for Alessandra? The booty.

“I wish I had a bigger butt. A little bit more booty wouldn’t hurt. When I was pregnant I had a much bigger booty and I was very happy with it,” the beauty joked at 15th Anniversary of the Victoria’s Secret Swim Catalogue last year.

Of course everyone is wondering what rigorous work out regimen the supermodel adopted to reclaim her jaw-dropping pre-baby body.

Yoga, apparently. Once a week.

At a book launch shortly after Anja’s birth in August 2008, Alessandra gave the frumpy housewives of the world one more reason to hate her by revealing that she didn’t do much at all to get her bod back to hot.

“I only do yoga once a week or so, but that’s it for now,” she shrugged. “[It was] just working out. There’s no magic. Close your mouth. Basically don’t eat any chocolate or sweets… Nothing that’s kind of unhealthy. Lots of healthy food, working out a lot, lots of cardio.”